Deere & Company (DE): As Good As It Gets

Record quarterly numbers that easily trampled Street estimates should have ideally charged up the bulls. Instead, Deere & Company (NYSE:DE)’s stock has lost about 7% since it announced results last week. The markets behaved as unpredictably in February when Deere’s stock was punished for another record quarter.

What is wrong with the market? Wasn’t the cautious outlook expected? It doesn’t even sound as murky as the market makes it to be! Now this is what rare opportunities are made of.

As good as it gets

To begin with, Deere & Company (NYSE:DE)’s second quarter was great. Both top and bottom lines hit record quarterly highs. Revenue rose 9% and net income improved around 3% year on year. So why did the stock tumble? Deere’s guidance fell short of Street’s expectations. But as I said, it wasn’t really that disappointing.

Deere & Company (NYSE:DE) scaled back its full-year revenue growth guidance by a percentage point to 5%, but left its net income projections untouched. If you ask me, a target of $3.3 billion on the bottom line looks good enough considering that it would be a near 10% jump over Deere’s last-year earnings. For those who didn’t know, 2012 was a record year for Deere.

The brighter side of things

That Deere & Company (NYSE:DE) expects its bottom line to grow at double the pace of its revenue is also a strong indication of the tight grip Deere has, and expects to have, over its costs. Best margin in the industry is one reason Deere is among my favorite stocks. I’ve picked out two competitors each in Deere’s two businesses and charted their quarterly gross and net margins over the past three years to see where Deere stands. 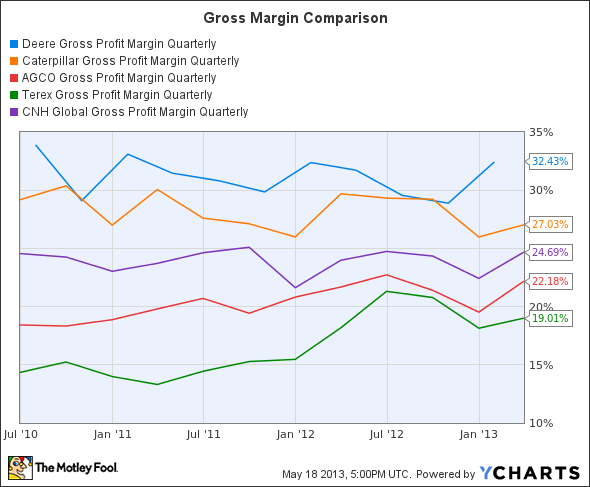 Deere & Company (NYSE:DE) has consistently generated the highest gross margin in the industry over the past few years. The gap with the closest competitor Caterpillar Inc. (NYSE:CAT) is considerable as well. The other three companies are way behind Deere. It’s a closer race on net margins but Deere still manages to walk away with the crown. 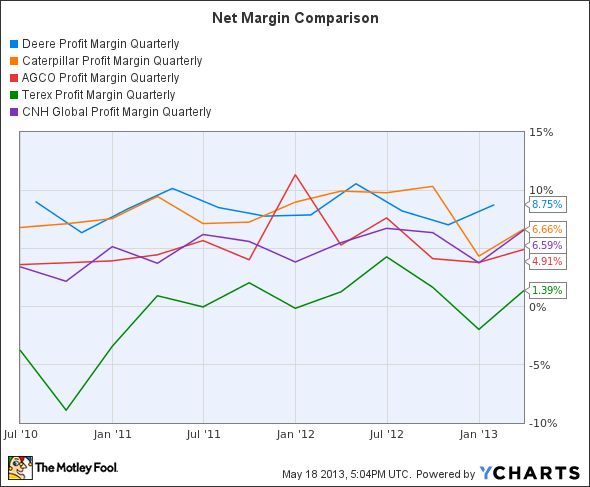 Caterpillar Inc. (NYSE:CAT) has faced tremendous margin pressure since last year as sales of mining equipment slowed down on low commodity prices and reduced spending by customers. The result is the sharp dip in its net margin from 10% to nearly 6% in the past two quarters.

Meanwhile, CNH Global NV (ADR) (NYSE:CNH)’s gross and net margins appear to be on an upward trajectory, thanks to higher sales volumes of agriculture equipment and lower costs.

Higher margins are among AGCO Corporation (NYSE:AGCO)’s top ‘financial goals’ for 2013. New products and better marketing techniques, apart from higher pricing and cost control are helping AGCO maintain its gross margin above the 20% mark. Yet, AGCO has a long way to go to catch up with Deere’s solid margins.

Terex Corporation (NYSE:TEX) is a great example of management efficiency as its gross margin has expanded rapidly since 2011. But its net income growth still leaves much to be desired. One reason for Terex’s uninspiring low single-digit net margin is higher interest outflow following the acquisition of Europe-based Demag Cranes in 2011.

Going by Deere & Company (NYSE:DE)’s outlook, it should continue to generate some good margins helping it maintain the lead. In fact, investors shouldn’t read much into its reduced revenue guidance either because its core business of farm equipment, which makes up as much as 80% of sales, is still expected to generate 7% higher revenue this year. That’s way better than CNH Global NV (ADR) (NYSE:CNH)’s projections of flat to 5% lower revenue for the full year, and pretty much in line with AGCO Corporation (NYSE:AGCO)’s expectations of between 5% and 7% growth in farm equipment revenue.