Deere & Company (DE), AGCO Corporation (AGCO): You Are Probably Missing the Big Opportunity in This Stock

Because companies sometimes fail to deliver despite tall claims and promises, I usually take management statements with a pinch of salt. So when Deere & Company (NYSE:DE)‘s deputy financial officer, Marie Ziegler, recently said that its management had intensified share repurchases during the last quarter because it feels the company’s shares are trading “significantly below” their intrinsic value, it made me sit up.

Is Deere & Company (NYSE:DE)’s stock really undervalued? At a P/E of less than 10, the stock does look cheap. But a buyback may push up share prices because it artificially increases earnings per share, thereby making the stock look cheap. That’s not growth in real terms.

Deere & Company (NYSE:DE) needs to convince investors about its growth prospects in the near future and deliver strong growth on its top and bottom lines. From that standpoint, Deere’s growth story looks intact, and the stock may have been punished unnecessarily. In other words, Deere’s shares present a great opportunity for investors.

Consistency and resiliency
Despite sluggishness in its construction-equipment business, Deere & Company (NYSE:DE) delivered a record third quarter recently, with 26% improvement in net income year over year. Its top-line growth was comparatively smaller at 4%, but I think the fact that Deere churned such good profits from small incremental sales is notable. Investors should be happy to know that Deere now expects to end its fiscal year in October with record net income of $3.45 billion, which would be an impressive 13% jump over what it earned for 2012.

More importantly, looking beyond one quarter or even a single year, Deere & Company (NYSE:DE)’s revenue and profits have risen consistently since 2010. 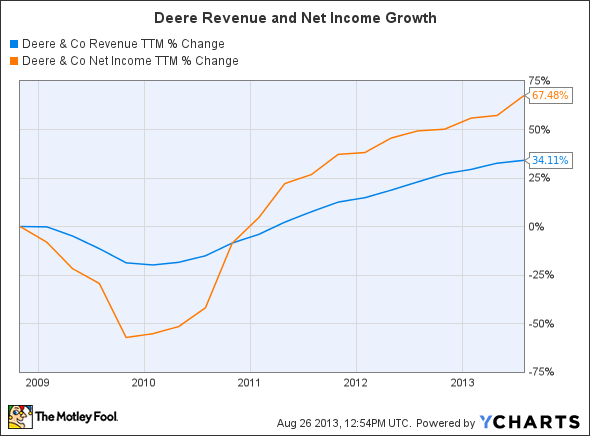 Investors should note that even in a challenging year like 2012, when the U.S. was hit by the worst-ever drought, Deere & Company (NYSE:DE)’s profits hit a new high. That’s resiliency at its best.

Even better, Deere & Company (NYSE:DE)’s operating margin has had an equally good run-up in recent years, with margin in its agriculture and turf division hitting 17% in the last quarter. What’s more, you may be surprised to know that Deere’s margins are among the best in the industry. 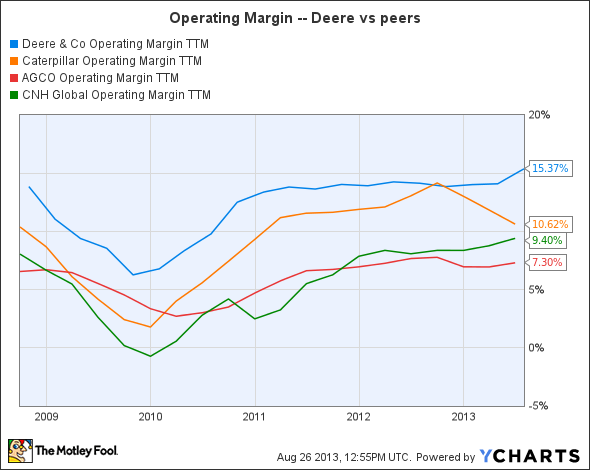 For a fair comparison, since 80% of Deere & Company (NYSE:DE)’s revenue comes from the sale of agriculture equipment and the remaining from its construction and forestry business, I have selected two competitors from the farm-equipment industry, AGCO Corporation (NYSE:AGCO) and CNH Global NV (ADR) (NYSE:CNH), and one from the construction-equipment space, Caterpillar Inc. (NYSE:CAT).

As you can see, while each of these companies has improved its operating margins since 2010, Deere & Company (NYSE:DE)’s margin is more than twice that of AGCO Corporation (NYSE:AGCO)’s and a good 6 percentage points better than CNH Global NV (ADR) (NYSE:CNH)’s. Caterpillar Inc. (NYSE:CAT)’s margin has grown at the fastest pace over the years, but maintaining it has become an uphill task for the company in the wake of the recent mining industry malaise. So despite facing similar headwinds as Caterpillar in its construction-equipment business, Deere is still better off.

In short, Deere & Company (NYSE:DE) has consistently delivered high revenue and profits and maintained healthy margins, and the company is set to end its financial year on a good note. Even better, recent fears about industry conditions may have been overblown.