Macy’s, bellwether for the middle income consumer, took a hit after lowering guidance, sending the market down. On their conference call, Macy’s stressed they would push boots aggressively and a good boot season was of utmost importance.

Boot demand also matters for shoe makers Deckers Outdoor Corp (NASDAQ:DECK), Steven Madden, Ltd. (NASDAQ:SHOO), and Crocs, Inc. (NASDAQ:CROX). Deckers Outdoor Corp (NASDAQ:DECK) and Crocs have been labeled as fad stocks for years. Deckers make the Uggs sheepskin boots, once so popular that the stock rose to a high near $120, only to hurtle to $28.63. Crocs, Inc. (NASDAQ:CROX), known for its non-stink clogs, surged to the high $70s in 2007 only to crash under $1.00. 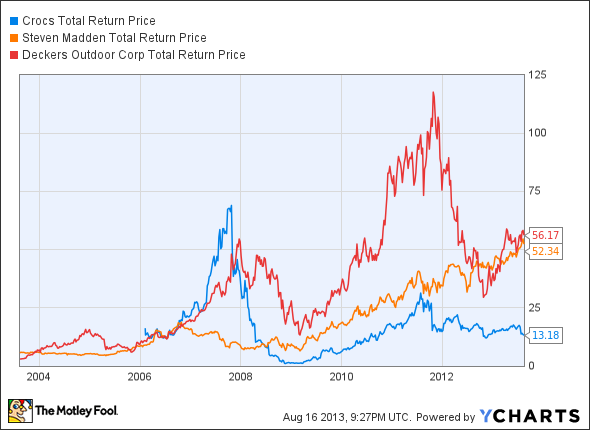 Deckers Outdoor Corp (NASDAQ:DECK) has struggled with declining sales and higher sheepskin costs. The company has several shoe lines: Ahnu, MOZO, TSUBO, and Moka One One, but UGG Australia is their main line.

To be fair Deckers Outdoor Corp (NASDAQ:DECK)’s revenues historically come in much higher in the back half of the year. (chart from Fool.com)

But the EPS trend with a loss of $0.85 in the second quarter tells a sorrier tale, with the company unlikely to beat that $3.53 in EPS for full year 2012. The total return for Deckers Outdoor has been high since its debut, and some might be tempted by a trailing P/E of 18.80 and other numbers like price/sales at 1.36 that are lower than the industry average.

The EPS chart is worrying. Deckers noted that sheepskin won’t cost as much going forward after locking in prices, but store opening costs and SG&A expenses are expected to climb. SG&A expenses have risen from $40 million in 2009 to $112 million in 2013. Capital spending at a ratio of 69.88% is much higher than the industry average of 10.98%.