Whenever I’m looking at a retail company, I can’t help but remember Peter Lynch’s sage advice. He said to keep an eye on inventory levels. If inventories climb faster than sales, it may be a warning sign. This advice has helped me avoid some losses over the years, and it’s advice that Deckers Outdoor Corp (NASDAQ:DECK) investors need to listen to today.

Reliance On One Product
My problem with Deckers starts long before today. I owned the stock for over a year, because I was impressed with the company’s expected earnings growth, and the shares were trading for a P/E ratio below the growth rate. I also knew that the company’s most important product, UGG was popular, because my wife’s niece just received a pair for Christmas and she was thrilled. Based on the perceived popularity of the product, and the stock selling at a discount to their growth rate, I bought shares. 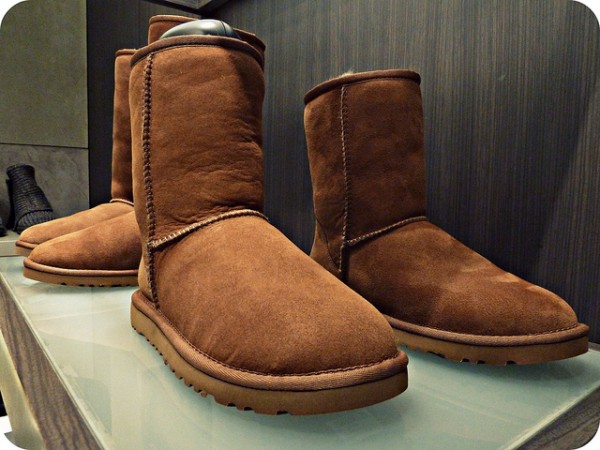 I read articles about Deckers Outdoor Corp (NASDAQ:DECK) over the next year or so, and many suggested that UGGs were a fad. I knew this wasn’t true, because the UGG boot concept goes back more than 20 years. I also saw articles warning about the company’s heavy reliance on one product. Those are the articles I should have paid more attention to.

Deckers competes with multiple companies, and they all are more diversified. Traditionally, athletic footwear, both NIKE, Inc. (NYSE:NKE) and Under Armour Inc (NYSE:UA) have expanded their shoe selection to include boots that could be replacements for the UGG brand. One of their more notable competitors is Timberland, which was acquired by V.F. Corporation (NYSE:VFC). The biggest difference between these companies and Deckers is Deckers needs UGGs to sell well to be successful.

Think about this, UGG sales measured by revenue were over $580 million this last quarter, the next closest brand was Sanuk, which reported sales of just $15.3 million. As you can see, it almost doesn’t matter what their other brands do, if UGGs has a problem, Deckers Outdoor Corp (NASDAQ:DECK) has a problem.

It’s All About Inventory Management
The two problems plaguing Deckers are tied to how the company manages inventory. In the current quarter, UGG sales increased 2.9%. However, UGG inventory rose by more than 23%. A company could increase their inventories because they expect big sales in the future.

Unfortunately, Deckers’ management isn’t expecting big things. The company said they expect 4% growth in UGG sales for the full year. What is really problematic is, the company’s gross margin dropped from 51% last year to 46.3% this year. Deckers Outdoor Corp (NASDAQ:DECK) admitted they priced UGG products too highly last quarter, and said they were adjusting pricing to improve the value proposition.

Here is the problem, Deckers expects 5% EPS growth for 2013 if they manage a 46.5% gross margin. With competitors V.F. Corp. at a 47.4% gross margin, Under Armour at 40.25%, and even NIKE, Inc. (NYSE:NKE) managing 42.6%, this margin assumption for Deckers Outdoor Corp (NASDAQ:DECK) might seem realistic. However, if you look at the big picture the company won’t make this goal.

Common Sense Says 2013 Isn’t Going To Be A Good Year
Let’s think this through, Deckers’ management is assuming a 46% gross margin for the full year. However, last year the company saw gross margin drop 5% because they had to mare down prices to move inventory.

This year, management expects just 4% sales growth at UGG, but inventories are already up 23%. In addition, looking at Deckers Outdoor Corp (NASDAQ:DECK)’s total inventory versus their annual sales, the company is already carrying too much.

The bottom line is, Deckers is already carrying relatively more inventory than their peers. The company is likely to have to take more markdowns to get this situation resolved, which will lead to a lower gross margin. If the company would grow EPS by just 5% with a 46% margin, imagine what could happen if the margin comes in lower.

Better Options Abound
From an investment perspective, each of Deckers Outdoor Corp (NASDAQ:DECK)’s competitors seems like a better deal. V.F. Corp. pays a yield of 2.1% and NIKE, Inc. (NYSE:NKE)’s yield is 1.5%. Both companies are also expected to grow earnings faster than Deckers in the next few years. In fact, V.F. Corp. pays the highest yield, is growing faster, and yet sells for a similar P/E ratio. Investors looking for even better growth, could go with Under Armour’s expected 21% EPS growth rate.

Every quarter Deckers’ management ignores this inventory problem, making it harder to solve. It’s time for the company to face reality, clear out their excess inventory, and start fresh. Investors should probably just start fresh with a different stock.

The article 2 Numbers Suggest This Company Isn’t Facing Reality originally appeared on Fool.com and is written by Chad Henage.