Deckers Outdoor Corp (DECK) Has Lots Of Growth Ahead

Deckers Outdoor Corp (NASDAQ:DECK) has been beaten up by Mr. Market over the past year, after an amazing run over the past decade.  One of the great growth stories of the 2000’s, Deckers Outdoor Corp rose from a (split-adjusted) low of just 42 cents per share in 1998 to a peak of $118.90 in late 2011, for a phenomenal rise of 28,200% at the peak.  Since the highs, it has given back some of its gains, and now trades in the low 40’s.  With the company set to report 2012’s results on Feb. 19, is this growth story over or is it just beginning?

Deckers Outdoor Corp produces high-quality footwear under six brand names: UGG, Teva, Sanuk, TSUBO, Ahnu, and MOZO.  UGG, the company’s luxury sheepskin footwear line, accounts for the majority (87%) of Deckers Outdoors Corp’s sales, with Teva a distant second at 9% of sales.  Over the past decade, revenues have exploded increasing from under $100 million annually to almost $1.5 billion. 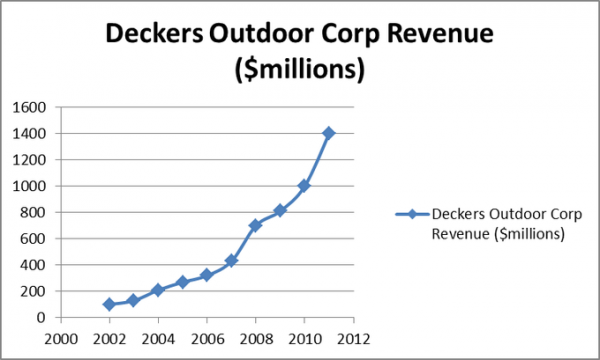 The company’s growth plans consist of increasing their retail footprint, primarily overseas.  Deckers Outdoor Corp is opening approximately 25 new stores per year, with the majority being outside of the U.S.  Additionally, the company wants to aggressively expand the distribution of Teva products in family shoe stores and department stores.

Some think UGG’s don’t have much room to grow, but Deckers Outdoor Corp disagrees.  Being a mainly cold-weather product, the highest UGG sales occur in the third and fourth quarters of the year.  Deckers Outdoor Corp plans to grow the spring line of products in order to boost sales the rest of the year, as well as to add new men’s products and a handbag line.

For all of their explosive growth, Deckers Outdoor Corp is a very cheap stock right now.  When the company reports, they are expected to have earned $3.35 per share for 2012, meaning that the stock trades at 13 times earnings.  The company is projected to grow earnings to $3.72 and $4.40 in 2013 and 2014 respectively, for a forward annual growth rate of 14.7%.  Additionally, the company has over $250 million ($6.49 per share) in cash and no debt.  Backing this out of the share price, the business is only trading at 11.1 times earnings.  Very cheap!

Specialty footwear companies seem to be generally cheap right now.  For example, Crocs, Inc. (NASDAQ:CROX), which reports their 2012 earnings the day before Decker, is similarly valued, trading at 11 times earnings with 13% forward earnings growth, and also has a great cash/debt position.  This one is another nice growth story, trading below $1 as recently as 2009.

Steven Madden, Ltd. (NASDAQ:SHOO) is another shoe manufacturer reporting earnings the day before Deckers Outdoor Corp. (Decker investors: pay attention to these reports on Feb. 18.  It is very likely that these three companies all experienced similar sales trends)  Steve Madden appears a bit more expensive than the other two, trading at 16.9 times earnings, with just 10% forward earnings growth projected.  While I think Steve Madden is a good company, the other two just look much more attractively valued.