DBV Technologies SA – ADR (NASDAQ:DBVT) was in 14 hedge funds’ portfolios at the end of the third quarter of 2016. DBVT shareholders have witnessed an increase in activity from the world’s largest hedge funds of late. There were 10 hedge funds in our database with DBVT holdings at the end of the previous quarter. At the end of this article we will also compare DBVT to other stocks including Mitel Networks Corporation (NASDAQ:MITL), Universal Health Realty Income Trust (NYSE:UHT), and Green Plains Renewable Energy Inc. (NASDAQ:GPRE) to get a better sense of its popularity.

What does the smart money think about DBV Technologies SA – ADR (NASDAQ:DBVT)?

At Q3’s end, a total of 14 of the hedge funds tracked by Insider Monkey were long this stock, a 40% rise from one quarter earlier. The graph below displays the number of hedge funds with bullish positions in DBVT over the last 5 quarters, which shows a decline over that time, despite the Q3 gain. So, let’s examine which hedge funds were among the top holders of the stock and which hedge funds were making big moves. 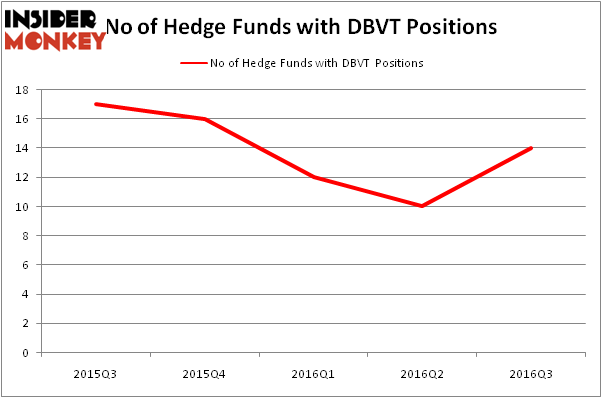 Of the funds tracked by Insider Monkey, Baker Bros. Advisors, led by Julian Baker and Felix Baker, holds the biggest position in DBV Technologies SA – ADR (NASDAQ:DBVT). Baker Bros. Advisors has a $200.2 million position in the stock, comprising 1.8% of its 13F portfolio. Sitting at the No. 2 spot is James E. Flynn of Deerfield Management, with a $63.3 million position; 2.9% of its 13F portfolio is allocated to the company. Remaining professional money managers with similar optimism contain Anders Hove and Bong Koh’s VHCP Management, Joseph Edelman’s Perceptive Advisors, and Samuel Isaly’s OrbiMed Advisors. We should note that none of these hedge funds are among our list of the 100 best performing hedge funds which is based on the performance of their 13F long positions in non-microcap stocks.