Darden Restaurants, Inc. (NYSE:DRI), the parent company of Olive Garden, Red Lobster and LongHorn Steakhouse, has stalled out over the past three years, despite bouncing back strongly from the depths of the recession. Once a strong growth stock in the 1990s, Darden’s full-service diners are now being abandoned in favor of fast growth bistro chains such as Chipotle Mexican Grill, Inc. (NYSE:CMG) and Panera Bread Co (NASDAQ:PNRA), which provide high quality fast food at a cheaper price.

Although Darden’s third quarter earnings topped Wall Street estimates, the company is still struggling to stave off negative same-store sales growth and declining profits. Should investors abandon this former icon of the American restaurant industry for moreprofitable restaurants instead?

Darden’s combined same-store sales, primarily generated by its three flagship restaurants, slid 4.6%. Darden Restaurants, Inc. (NYSE:DRI) attributed the drop to adverse winter weather conditions in December and February. The company’s same-store sales drop of 9% in February, accompanied by a 7% decline in store traffic, was its steepest monthly loss during the quarter. As a result, same-store sales dropped at all three brands.

Longhorn Steakhouse’s revenue rose 6.9% to $332 million, due to the addition of 42 new locations. Same-store sales dropped 1.6%.

Although Darden’s rapid expansion has kept revenue flowing in, there are some problems with the company’s key financial metrics. 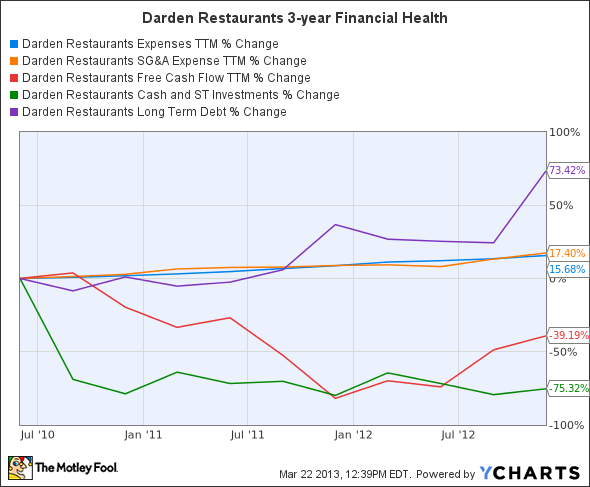 Since the end of the recession, expenses and debt have risen, while free cash flow and cash have decreased. Therefore, it might not be prudent to continue expanding simply to generate more revenue while these metrics are all apparently headed in the wrong directions.

Being everywhere is not a good thing

The main problem with Darden Restaurants is the public perception of its three flagship brands. Driving around any town in America, two of the brands – Olive Garden and Red Lobster – seem to be next to every strip mall or interstate highway. Simply put, they are as common a sight as McDonald’s or Taco Bell, but more expensive.

That’s why we’re seeing stronger growth from its specialty restaurants, as well as softer declines from LongHorn Steakhouse, which is smaller and has less saturation than Olive Garden or Red Lobster.

Two companies have changed the American perception of dining more than any others: Chipotle Mexican Grill, Inc. (NYSE:CMG) and Panera Bread (NASDAQ:PNRA). Prior to the arrival of these two brands, restaurants were generally classified as ‘fast food’ – like McDonald’s – or ‘full service’ – like Olive Garden.