D.R. Horton, Inc. (DHI), PulteGroup, Inc. (PHM): Why Not a Florida Cure for Your Housing Blues?

The dramatic growth we’ve seen in the housing market may have come to an end, now that mortgage rates have recently reached a two-year high of nearly 4.6%. Investors in housing equities have become so jittery that the Dow Jones U.S. Home Construction Index registered a sharp drop in August, from a nearly six-year peak this May: 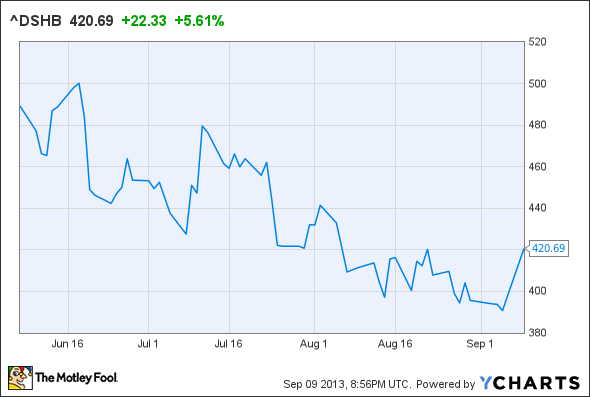 Nevertheless, the housing sector appears to still harbor some pockets of strength. There’s continuing optimism among members of the National Association of Home Builders (NAHB) . Also, the Improving Market Index identifies some regional hot-spots based on gains in building permits, home prices, and employment, which can help sort out some promising stock picks.

Going by this measure, WCI Communities, which had its IPO in July, is one stock worth considering. Based in Bonita Springs, Fla, WCI is not only a builder of luxury single-detached and multi-family homes. It also develops and operates the lifestyle amenities for the master-planned communities it builds, including golf and country club facilities. The company provides real estate services as well.

Potential investors may take particular interest in WCI because of its exclusive focus on the Sunshine State, a major U.S. residential destination for snowbirds. Significantly, the company has a presence in Florida metropolitan areas identified in the August NAHB IMI as having vibrant growth from their respective lows, in terms of permits, prices, and employment. This index includes Florida metropolitan statistical areas, or MSAs, that exhibited growth rates on the three measures for the last six months.

The table below shows how WCI’s major markets stand in the index:

Strong population growth in Florida,  forecast at 2% for 2014 or double that of the national rate, likewise augurs well for the fortunes of the state’s homebuilders. With this pace, Florida could overtake New York as the country’s third most populous state, according to an analyst at Moody’s Analytics.

A thinning inventory of available homes likewise favors WCI. Months supply of inventory for single-family homes in Florida dropped by 31.4% in the second quarter, from 7.2 months to five months year over year. In the Sarasota-Manatee area, inventory of single family homes was estimated to have already declined to around the three-month level in July. Six months’ inventory is generally considered a healthy balance between supply and demand in the home market.

The high rate of Florida foreclosures, meanwhile, appears a non-issue on the fortune of WCI. The current foreclosure activity in the state comes from older cases from the housing bubble, which are moving through the state’s protracted legal process on foreclosures.  Also, filing of new foreclosure cases was reported on the decline, with drops this June of 23% statewide and 17% in South Florida.

Big boys eye piece of the action
With this promising outlook for the home market in Florida, national homebuilders have also been increasing their stakes in the Sunshine State, particularly in the North Port, Fla., Sarasota, Fla., and Bradenton, Fla. MSAs. This July, D.R. Horton, Inc. (NYSE:DHI) acquired over 80 vacant lots in Manatee County for $4.1 million. The Fort Worth, Texas-based builder also has several approved projects in the area and is reported to be eyeing the development of a golf community in Sarasota, Fla.