Back in 2007, Chinese travel stocks were expected to be the next great growth industry. At the time, investors had many reasons to be optimistic. The 2008 Olympics were supposed to open the floodgates to tourists, and the 2010 Shanghai World Expo and Guangzhou Asian Games would generate huge amounts of revenue for Chinese travel and lodging companies. Unfortunately, that grand long-term view didn’t account for the devastating 2008-2009 financial meltdown, the subsequent European sovereign debt crisis, a slowdown in Chinese GDP growth, and the recent outbreak of the H7N9 avian flu.

All of these factors have cast a long shadow over the industry, which means that it might be time for brave contrarian investors to load up on some depressed Chinese travel stocks. There are two primary ways for U.S. investors to invest in the Chinese travel market – through hotels and online travel booking sites. Let’s take a look at the best choices in these two industries.

is the biggest and safest bet in the Chinese hotel industry. With over 1,400 economy locations in 212 cities, Home Inns controls over 40% of the domestic lodging market. Home Inns notably acquired its rival Motel 168 (which includes Motel 268 and Yotel QQ) for $470 million in 2011.

Back in 2011, Home Inns struggled due to unfavorable year-on-year comparisons to 2010’s Shanghai Expo-boosted numbers. At the peak of the Expo, Home Inns’ average occupancy rate rose to 94% – an all time high. Its big acquisition of Motel 168 also spooked investors. As a result, the stock has lost nearly half of its value over the past three years.

Yet Home Inns has managed to consistently hit its target of opening 300 new inns and hotels on an annual basis. The company also recently affirmed its 2013 target to add 360 to 380 hotels by the end of the year. In other words, despite suffering from year-on-year comparisons in 2011, the company has continued to expand.

Moreover, Home Inns recently posted strong first quarter earnings that topped both top and bottom-line analyst estimates. The company reported earnings of $0.04 per share, topping the consensus estimate for a $0.05 loss. Home Inn’s revenue rose 11.7% year-on-year to $225.8 million, also ahead of the $219.2 million that analysts had expected. Home Inns now expects total revenue for fiscal 2013 to come in between 6.6 billion to 6.8 billion RMB ($1.07 billion to $1.10 billion), which would equal year-on-year growth of 14.4% to 17.9%.

While those numbers are solid for the quarter, a look at its longer-term growth is a bit puzzling, as seen in the following chart. 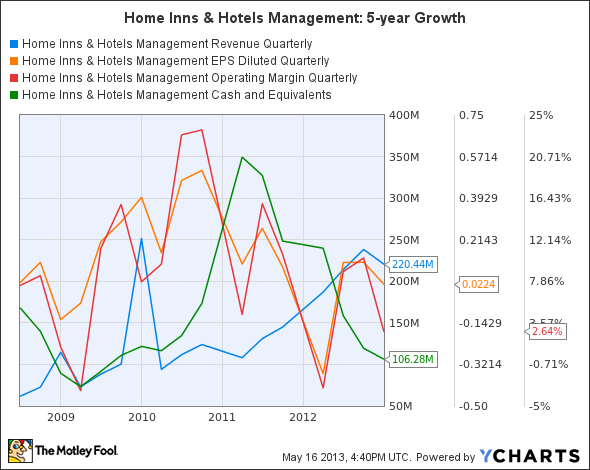 The fact that Home Inns posted positive earnings per share last quarter indicates that its bottom line is improving, but the company’s margins and free cash flow have been wildly unpredictable. If Home Inns can continue posting positive earnings, rising revPAR and higher occupancy rates throughout the year, then it’s highly possible that these metrics will all stabilize in the right direction. If that happens, Home Inns will take off, since analysts are projecting the company’s full-year EPS to rise 54% at the end of 2013.

Ctrip controls nearly 50% of China’s online travel bookings, which include flights, hotels and packaged tours. eLong, which controls roughly 8%, formulated a plan in 2010 to gain market share at the expense of profits – cash rebates. By offering cash rebates for most of its listed hotels in 2010, eLong’s year-on-year room bookings growth surged from 32% to 56% between 2010 and 2012.