A few days ago, Fool analyst Michael Olson added CSX Corporation (NYSE:CSX), a freight railroad company that dominates the east coast, to his real-money portfolio. Of course, that recommendation hinges in large part on the continued success of coal, which currently accounts for approximately 40% of U.S. energy. Despite a near-consensus bear attitude toward coal, reasons for optimism remains.

As of the end of May, coal prices (even those of Appalachian coal, to which CSX Corporation (NYSE:CSX) has significant exposure) stubbornly resided below $3 per MMBtu (million British thermal units.) One of coal’s main competitors, natural gas, costs substantially more: roughly $3.65 per MMBtu. In part because of this discrepancy, the International Energy Agency predicts a 1.2 billion ton increase in world coal demand (a $105 billion industry revenue boost at 2011 coal prices) by 2017.

Still, coal prices will undoubtedly spike. Because coal companies typically mine the most accessible coal first, they can only mine less than 10% of the enormous U.S. coal supply at active mines. This means continued production will require large capital expenditures. Furthermore, coal companies are struggling with declining profit margins; take a look at three of the largest coal companies trading on a U.S. exchange: Peabody Energy Corporation (NYSE:BTU),Yanzhou Coal Mining Co Ltd (ADR) (NYSE:YZC), and CONSOL Energy Inc. (NYSE:CNX). 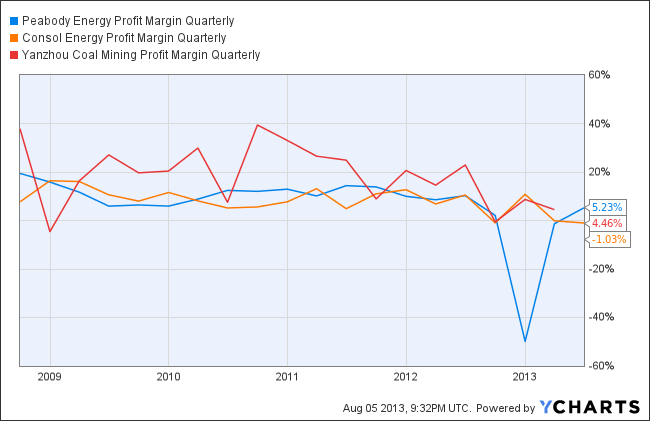 On the flipside, how much does it really matter? Coal prices will rise, but new technology should keep prices reasonable. Underground coal gasification (UCG), which continues to receive increased research interest, currently costs $6 per MMBtu. UCG allows companies to mine additional coal that was previously inaccessible due to geological positioning, and the cost of its production can only fall from its $6 level.

Natural gas is rising, too

According to the EIA, natural gas and coal will account for somewhere between 58% and 70% of U.S. electrical power by 2040. In other words, coal—currently responsible for more than 40% of the U.S. power usage—can continue to contend simply by holding its prices competitive relative to those of natural gas.

The great “natural gas boom” has a long way to go. Although delivered natural gas prices currently costs $3.65 per MMBtu, you can expect them to rise in the near future. Shortages are already pushing the price up, and some analysts and company executives have put the break-even point of a dry natural gas well (a well that only produces natural gas) at $6 per MMBtu (based on current technology.)

Extraction techniques can improve, of course, and they probably will. The fact remains that U.S. natural gas producers believe that prices need to rise. At the end of 2012, Forbes reported that Chesapeake Energy Corporation (NYSE:CHK), which by itself is responsible for 30% of recent growth in the natural gas industry, was scaling back its rigs to instead focus on oil and liquid gas. Chesapeake announced that it would consider heavier investment in natural gas rigs when they become more profitable. This will happen when natural gas prices rise to around $5-$6 per MMBtu (which is the current price of UCG coal.)

Who are the winners and losers?

Predicting the future is a difficult enterprise, of course, but the guarantee that coal will drop off the map makes little sense. It’s certainly possible that coal will surrender a little market share, especially with the federal government seeming to legislate against it. The idea that the coal giants are doomed—especially when companies like Peabody Energy Corporation (NYSE:BTU) are heavily invested in the new UCG technology—fails to see the more nuanced picture.

All of this paints a rosy picture for CSX Corporation (NYSE:CSX) and other companies indirectly exposed to coal. After losing 50% of its coal volume between 2006 and 2012, and expecting another 5%-10% drop this year, CSX management predicts coal volume will stabilize. That estimate might even be a bit low. Coal won’t be returning to 2006 levels, but CSX might see some temporary gains as it begins to pull increasing revenue from the cheaper Powder River Basin coal. If CSX coal sales can just stay even, the rail giant’s success with other cargo would push sales up even as costs drop.

A less rosy market awaits Peabody Energy Corporation (NYSE:BTU), though its overall prospects could merit a buy as well. Due largely to international exposure, Peabody’s gross profit has stayed relatively flat even as coal sales have dropped. Unfortunately, mine closure costs appeared on the balance sheet in 2012 and knocked operating margins down from 13.6% to 2.1%.