CSX Corporation (CSX): Not Impressed With The Buyback Plan

In the case of CSX Corporation (NYSE:CSX), the company announced plans for a buyback that doesn’t provide enough incentives to suggest the scale and scope that would move the needle. Considering the railroad operator has been a significant buyer of stock in the past, the new plan suggests caution at the operator or a general lack of free cash flow compared to the current market value.

CSX Corporation (NYSE:CSX) announced a plan to repurchase $1 billion worth of stock over the next two years. While a solid buyback program, the amount doesn’t move the needle much for a stock with a $24 billion market cap now. If the company splits the plan evenly over the next two years, it will only amount to roughly 2% of the outstanding shares each year.

With cash being a very precious commodity, the preference would be for the company to only utilize the buyback on stock swoons or if the prospects improve dramatically while the stock flat lines. Otherwise, it should only be used for extreme low valuations and not as a standard monthly program.

The current trailing PE (see chart below) is in the normal range over the last five years. If anything, the fourth quarter provided the opportune time to utilize a buyback yet CSX Corporation (NYSE:CSX) only bought $230 million of stock during that period. In addition, the company didn’t provide any indication that it would only initiate the buyback on weakness. 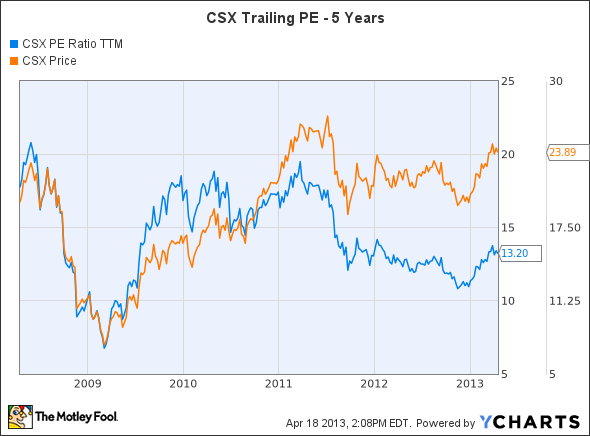 While not buying any stock during Q113, CSX Corporation (NYSE:CSX) bought $734 million in 2012 and $1.56 billion in 2012. The current plan calls for only $500 million on a annual basis suggesting the board of directors continues to be less enthralled with the prospects of the industry.

CSX does offer a solid 2.3% dividend. The company raised the quarterly dividend to $0.15 and claims a record of increasing the dividend 11 times since 2005 with a compounded annual growth rate of 29%. Clearly the stock isn’t a horrible investment at these levels with a solid dividend and a decent buyback. The issue is that the railroad stocks might be played out based on the signals from management.

CSX Corporation (CSX): This Stock’s Earnings Should Keep Chugging Along...