In the search for long-term investment opportunities, I am quite interested in the sustainable businesses that are cheaply or reasonably valued on the stock market. Using StarMine data, Thompson Reuters’ senior analyst John Kozey listed 28 businesses that could become one of Warren Buffett’s favorites. In this article, I will cover one industrial company on that list. It is CSX Corporation (NYSE:CSX), a transportation service company.

CSX is considered to be one of the U.S. leading transportation companies, providing different transportation services such as traditional rail service, intermodal containers transport and trailer transport. CSX is operating in three main business segments including the merchandise business, the coal business and the intermodal business. The majority of 2012 revenue, $6.7 billion, or 57% of the total revenue, was generated from the merchandise business, which transported around 42% of the total 2012 volume of the company. The coal business ranked second, with $3.17 billion in revenue, or 27% of the total 2012 revenue while the intermodal business generated about $1.64 in revenue.

A cyclical business that is improving

The transportation business is quite cyclical, meaning that the business fluctuates along with the ups and downs of the overall economy. Indeed, CSX Corporation (NYSE:CSX) experienced a significant drop in both revenue and income in 2009, followed by steady improvement since 2010. 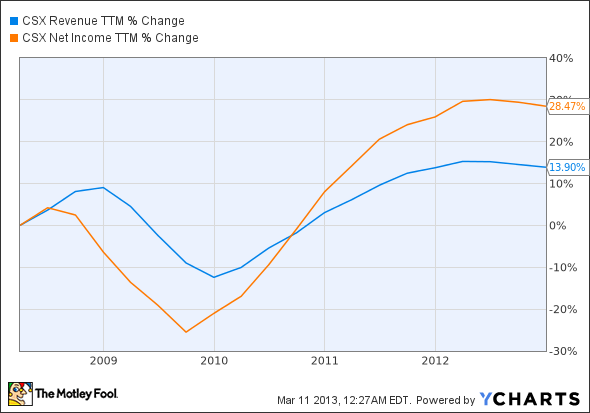 As the general economy improves, its top and bottom lines exceeded those levels reached in 2008. Compared to 2008, the revenue has increased by 13.9% while the net income has risen by 28.5%, due in large part to lower operating expenses. Since 2008, its operating ratio has been declining. The operating ratio equals annual operating expenses divided by annual revenue, excluding non-recurring items. For the past five years, its operating ratio dropped from 75.6% to only 70.6%. Furthermore, income investors would like CSX a lot due to its consistent increasing dividends. In the past ten years, its dividend has increased from $.07 in 2003 to $.54 in 2012. The dividend yield is currently staying at 2.14%.

Historically, CSX has consistently generated positive cash flow. In 2012, the operating cash flow was $2.95 billion and the free cash flow was $605 million. The consistent cash flow allows the business to leverage substantially. As of December 2012, it had nearly $9 billion in total stockholders’ equity, $1.37 billion in cash and short-term investments and more than $9.8 billion in debt. In addition, CSX Corporation (NYSE:CSX) had more than $8 billion in deferred tax liabilities, which are considered interest-free loans from the government.