Short-term traders love fad stocks. The public’s temporary infatuation with a hot product often causes investors to turn a blind eye to basic stock fundamentals, which often causes big rallies that can translate into big profits for traders. However, long-term investors should be wary of top-heavy fad stocks, which could unexpectedly fall off a cliff once the public tires of a product, or if it becomes commoditized through imitation.

Yet what defines a “fad stock”? How can investors separate a good product with staying power from those that will fade away? Let’s take a look at three “fad” footwear stocks – two of which I consider to be weaker than the other – to better understand how fad stocks can stabilize and keep growing.

Mention “fad” and “footwear” in the same sentence and most investors will immediately think of.

The creator of those polarizing, hole-filled Croslite (proprietary foam resin) shoes was once a Wall Street darling, peaking at nearly $70 per share in 2007. However, the financial crisis dealt Crocs, Inc. (NASDAQ:CROX) a near fatal blow that it has yet to fully recover from. Although its shares have since recovered from its crisis low of $1 per share, analysts are still divided regarding the company’s future. 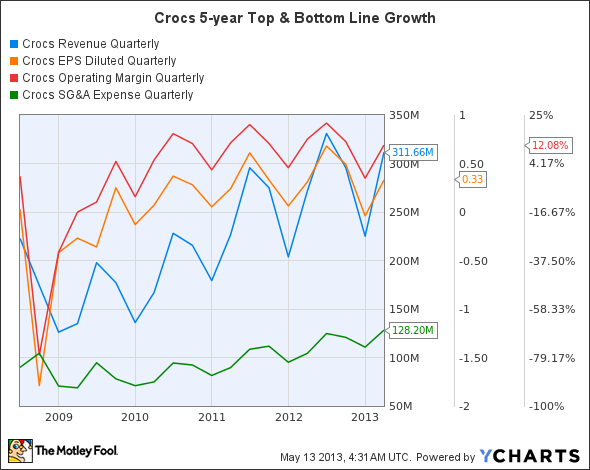 Crocs’ cyclical revenue growth, which appears to be the strongest during the summer, looks promising, but constantly rising expenses and flat margins could lead to flat or declining bottom-line growth in the near future, which generates the majority of its revenue from its popular UGG sheepskin boots, is regarded as another fad stock by many investors. The business is extremely top heavy, with 65% of its first quarter top line generated by UGG boots alone – down from 96% during the winter fourth quarter. This means that any weather impacts, such as unseasonably hot winters, will take a bite out of yearly sales. In addition, UGG boots, which originally come from Australia, have been a fashion trend since the 1990s, which means that demand could wane as new fashion trends emerge.