As we already know from media reports and hedge fund investor letters, many hedge funds lost money in October, blaming macroeconomic conditions and unpredictable events that hit several sectors, with healthcare among them. Nevertheless, most investors decided to stick to their bullish theses and their long-term focus allows us to profit from the recent declines. In particular, let’s take a look at what hedge funds think about Criteo SA (NASDAQ:CRTO) in this article.

Is Criteo SA (NASDAQ:CRTO) a buy, sell, or hold? The smart money is becoming hopeful. The number of long hedge fund positions advanced by 3 recently. Our calculations also showed that CRTO isn’t among the 30 most popular stocks among hedge funds.

What have hedge funds been doing with Criteo SA (NASDAQ:CRTO)? 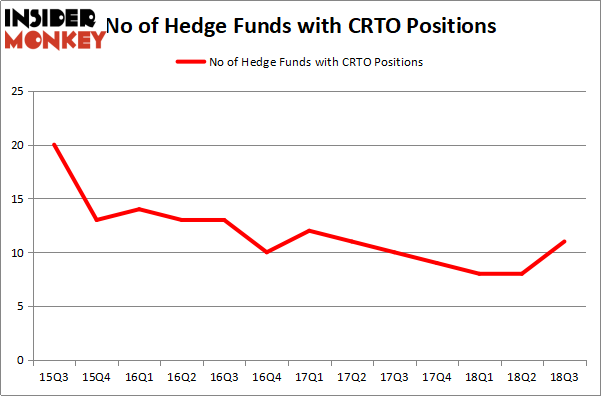 Among these funds, International Value Advisers held the most valuable stake in Criteo SA (NASDAQ:CRTO), which was worth $85.1 million at the end of the third quarter. On the second spot was Citadel Investment Group which amassed $30.8 million worth of shares. Moreover, Okumus Fund Management, Point72 Asset Management, and Millennium Management were also bullish on Criteo SA (NASDAQ:CRTO), allocating a large percentage of their portfolios to this stock.

As you can see these stocks had an average of 17 hedge funds with bullish positions and the average amount invested in these stocks was $119 million. That figure was $176 million in CRTO’s case. Rush Enterprises, Inc. (NASDAQ:RUSHA) is the most popular stock in this table. On the other hand TherapeuticsMD Inc (NASDAQ:TXMD) is the least popular one with only 14 bullish hedge fund positions. Compared to these stocks Criteo SA (NASDAQ:CRTO) is even less popular than TXMD. Considering that hedge funds aren’t fond of this stock in relation to other companies analyzed in this article, it may be a good idea to analyze it in detail and understand why the smart money isn’t behind this stock. This isn’t necessarily bad news. Although it is possible that hedge funds may think the stock is overpriced and view the stock as a short candidate, they may not be very familiar with the bullish thesis. In either case more research is warranted.