One trap investors sometimes fall into is buying the stock of a company because they like the company’s product. A good product and a good investment are two very different things, and ignoring the bias created by customer loyalty can be difficult. Stocks like this tend to become dramatically overpriced, with loyalty and blind optimism driving up the stock price. These stock almost always crash back to earth at some point

The future is…light bulbs?
The incandescent light bulb was the standard up until recently, but the hot yellow bulbs are being phased out as compact fluorescent lamps become more popular. Incandescent bulbs are highly inefficient, emitting about 90% of energy into heat instead of light. CFLs improve upon this, but they still leave much to be desired. The future is clearly light-emitting diodes, or LEDs, which convert almost all energy to light.

LEDs are not new, but using them to create light suitable for home use is a fairly recent development. One company that sells such bulbs is Cree, Inc. (NASDAQ:CREE), and up until recently the stock has been unstoppable. 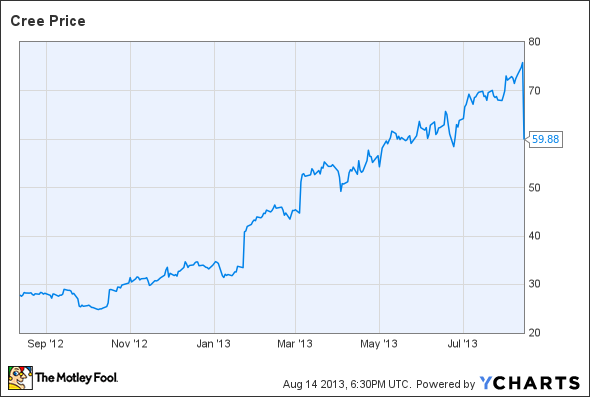 However, a recent weak earnings report caused a massive 20% decline in the stock the next day. Even with revenue growing 22% year over year, analysts were expecting more, and guidance suggested that margins would likely decline.

Most articles I read about Cree, Inc. (NASDAQ:CREE) focus on the energy savings a consumer could achieve by buying one of the company’s LED bulbs. Not only do the bulbs last longer than traditional bulbs, but they also use less energy, leading to significant cost savings over the bulb’s lifetime, even though the retail price is quite a bit higher. That’s all well and good, but Cree, Inc. (NASDAQ:CREE) is a light bulb company. Light bulbs — even advanced ones — are a commodity, therefore Cree, Inc. (NASDAQ:CREE)’s margins are declining. As LED lighting becomes more popular, competition will grow and prices will come down.

I don’t doubt that LEDs eventually will be the dominant form of lighting, but it won’t be a high-margin business. Before the post-earnings crash, Cree, Inc. (NASDAQ:CREE) had a market capitalization of almost $9 billion. That’s about nine times sales. Even now, the market cap is a little greater than $7 billion, which is nearly 50 times the best net-income figure from the past three years.

Revenue will grow, margins will decline, and those who bought Cree, Inc. (NASDAQ:CREE) at such high prices will be disappointed. It’s as simple as that.

Irrational exuberance
Electric-car company Tesla Motors Inc (NASDAQ:TSLA) has seen its stock rocket higher in 2013. So far this year, the stock is up more than 300%, as the company’s first real profit delighted investors. The Tesla Model S has received overwhelmingly positive reviews and taken a legitimate chunk of the luxury car market. Tesla Motors Inc (NASDAQ:TSLA) sold 5,150 Model S vehicles in the second quarter of this year.

Tesla Motors Inc (NASDAQ:TSLA)’s market cap is now about $20 billion. Trailing-12-month revenue is $1.3 billion, and while net income was positive, it was small enough to be insignificant.

The auto industry involves constant and substantial capital investments. Expanding production is expensive, and profit margins are typically small. Tesla Motors Inc (NASDAQ:TSLA) is aiming to eventually make a mass-market vehicle, and if it succeeds, margins will be extremely low. Ford, for example, had a net income margin of just 4.2% in 2012. More than 60% of its operating cash flow went to capital expenditures. As Tesla grows, profitability will be constrained by the nature of the industry.