We all have heard that phrase, and most people would agree that it’s not wise to rack up large amounts of credit card debt. However, the average American household has acquired slightly under $16,000 in credit card debt alone. With approximately 610 million credit cards in use across America, card holders average over 3.5 cards each. 98% percent of America’s revolving debt is acquired in credit cards. With today’s instant gratification society, let’s take a look at how credit card companies perform as an investment.

Although Discover Financial Services (NYSE:DFS) is only about 1/3 the size of its next competitor, it still shows a market cap of $19.3 billion. Not bad for such a small company. The company has had very sporadic revenues for the past ten years, including a 125% decrease in 2012. The company’s capital expenditures have increased annually since 2009. Earnings per share have only decreased twice in the past decade, and increased nearly 10% last year. The stock doesn’t appear to be discounted very much as it shows a 4.2% FCF yield.

Luckily for Discover, they are one of only two closed-loop credit card networks in America. After teaming up with Wal-Mart Stores, Inc. (NYSE:WMT) and other third party systems, Discover is catching up to the likes of Visa Inc (NYSE:V) and Mastercard Inc (NYSE:MA). Hopefully this will widen its narrow economic moat. The only other closed-loop credit card company is American Express Company (NYSE:AXP).

American Express’ market cap is over $67 billion, and represents over $50 million of credit. Earnings per share have increased every year for ten years with the exception of 2008. The company boasts 97 million cards in circulation worldwide. The company has seen capital expenditures increase by 54% in the last two years and 34% just last year. The company is valued slightly cheaper than Discover posting a 5.5% FCF yield.

At around $520/share MasterCard is not quite priceless, but its stock price is higher than the previous two companies. Capital expenditures have increased approximately 17% in the past year with FCF increasing for half a decade. Its market cap is only 3.5 billion more than American Express’, serves approximately 22,000 financial institutions worldwide.

The company boasts $176 million in credit and $129 million in debit. MasterCard is the #2 payment system in the U.S.. The company does not issue credit cards, but rather markets the MasterCard and Maestro brands. With more than 31 million locations accepting their card worldwide, it’s established in 210 countries and territories. MasterCard does show the lowest FCF yield at 4.1%, slightly under Discover. The only thing left for MasterCard to do is surpass Visa – now that my friends, would be priceless.

Visa boasts a wide economic moat, $1.7 billion in credit, and is the single largest payment system in the world. Not only does Visa market their cards themselves, but it also licenses the Visa name to member institutions. These institutions market their own products through Visa which generates more income for both institutions. Visa is the only company that has seen increases every year for a decade. In 2012, the company brought in over $10 billion in revenue. With a market cap of $105 billion, its FCF yield is the second highest at 4.4%.

All of these companies have done very well in the past few years. Anyone invested in these companies should have seen positive returns, and even outperformed the S&P 500. 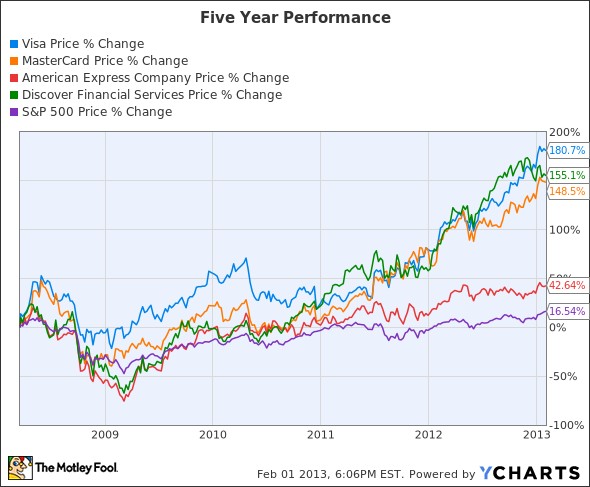 30% of total household debt is derived from the use of credit cards. Annually, figures of American consumers inch closer to $1 trillion in total credit card debt, and these companies all seem to be doing pretty well. Discover, MasterCard, and Visa are all priced at a fair value in the 4% – 4.5% FCF yield, while American Express is a full percent higher.

The biggest disappointment with these companies is how they make money. America has to be in debt in order for these companies to survive. Any of these companies should continue to perform well in the future, despite it being a win-lose situation for their clients.

The article Credit Is The Devil…Right? originally appeared on Fool.com and is written by Tyler Wofford.

eBay Inc (EBAY): The Making of A Payments Powerhouse

Berkshire Hathaway Inc. (BRK.A) (BRK.B): The One Stock You Should Own