There has been a string of positive news in the past few weeks. Along with a drop in the unemployment rate, there has been an increase in the disposable income, which has been relieving for the retailers. One such retailer, which has already been on track with solid performances, is Costco Wholesale Corporation (NASDAQ:COST). 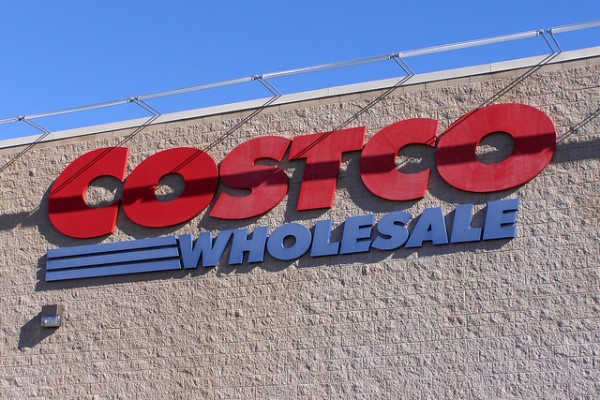 The company’s recent quarterly results stood out, as it outperformed most of its peers. Its numbers were above expectations, pushing the stock higher. Let us understand further.

The 8% jump in revenue over last year is commendable, since it wasn’t driven by increase in prices or addition of any other businesses. It was purely due to increase in its core product and membership sales. Though opening of five new stores played a crucial role, it was not limited to the same. Its same-store sales (which exclude the effect of stores opened during the year) increased 5%.

The company witnessed an increase in transaction size, as well as the number of transactions at its stores. Moreover, revenue from membership fees surged 15%, driving the top line higher.

Costco Wholesale Corporation (NASDAQ:COST) has been a remarkable performer when stock price appreciation is considered. It has been providing the highest returns to investors when compared to other large retailers, such as Target Corporation (NYSE:TGT) and Wal-Mart Stores, Inc. (NYSE:WMT). The 5 year stock price performance is depicted in the chart below: 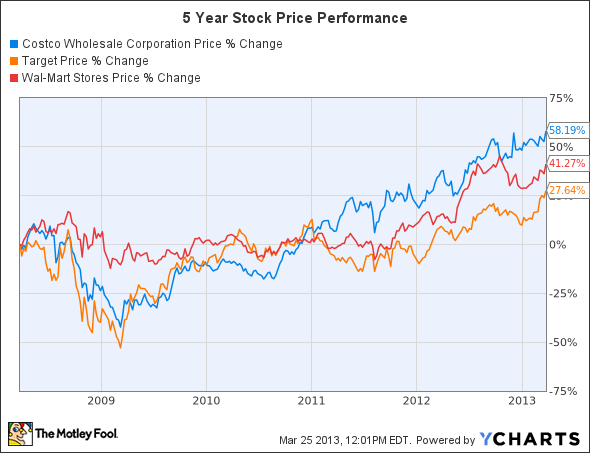 Costco Wholesale Corporation (NASDAQ:COST)’s stock price increased 58%, mainly because people did not mind paying for its membership fees as it provides significantly low prices, which Target and Wal-Mart Stores, Inc. (NYSE:WMT) cannot offer. This difference is mainly because Costco Wholesale Corporation (NASDAQ:COST) buys in bulk, directly from the manufacturers, and passes on the lower prices to its customers, luring more of them.

On the other hand, both Target and Wal-Mart Stores, Inc. (NYSE:WMT) have been struggling hard to drive traffic to their stores. Wal-Mart Stores, Inc. (NYSE:WMT) has been putting in a lot of effort, such as providing discounts regularly, strengthening its online operations, as well as cutting costs by having smaller stores. All these measures have started bearing fruits, and should help the company grow further.

However, Target has been comparatively inactive, with not too lower prices to offer. Though Target provides discounts to its customers, but not on a regular basis, which gives less incentive for people to stay hooked to Target stores, especially during difficult times.

Costco Wholesale Corporation (NASDAQ:COST) has been a stellar performer. It has opened new stores and plans to open another 14 warehouses during the year. It has been performing better than its peers, and has been paying regular dividends. The company has also entered into an agreement with Green Mountain Coffee Roasters Inc. (NASDAQ:GMCR) in order to get K-Cup packs made for single cup brewing system. Sale of K-Cups will again help boosting its revenue.

Lastly, the company’s business model is best suited for a tough environment, since it helps in providing products for cheap. Hence, this company should not be ignored by investors.

The article This Stock Will Never Let You Down originally appeared on Fool.com and is written by Himanshu Poddar.