For the first time in a long time, there’s a small ray of hope over the federal budget.

It’s a small one, to be sure, but it’s there. There is an actual prospect that a federal budget might be passed and it might represent a compromised between entrenched interests on both sides of the aisle. A year ago I would not have put any faith in that sort of thing happening.

Budgets are for wimps!

The American federal budget is a sore point for many people. Not having a reliable one means that the president needs to rule by executive order and has to stick with scheduled increases instead of having the flexibility to deal with issues and adjust priorities. Congress gets to make noise about wanting a balanced budget and cutbacks without actually having to specify cuts. It’s a mess.

But with some actual movement – no matter how unlikely it may be to actually occur – there’s a solid reason for investors to start thinking about the impact of a new budget on the markets. With entitlement cuts in the budget through the proposed chained consumer price index (CPI) plan, disposable income will be decreasing for some people. That can impact the sales of certain goods and services — and even equities. 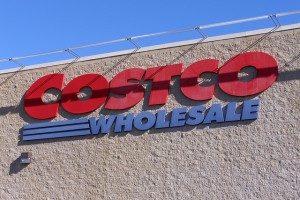 First up, a smaller, trimmer federal budget doesn’t mean that the federal government spends less money. In budget-speak, it means that the growth in spending slows while the total amount keeps rising. Wonderful, right? Still, it does mean that those receiving anything tied to the CPI will receive less in their monthly checks.

Here’s a few stocks that should do well with less income in some pockets.

Costco Wholesale Corporation (NASDAQ:COST) will do well with fewer disposable dollars running around. A true discount retailer, Costco provides cheap goods in a convenient location. As seniors and those on disability find themselves with marginally less income (though it adds up over time), the pressure to save money by moving from more upscale stores to low cost stores will begin to add up.

Costco Wholesale Corporation (NASDAQ:COST) is already on the way up, even in the face of a growing economy. Just released sales numbers for March show a 7% growth in year-over-year sales and the company’s shares have reflected it, outstripping the Dow and growing 19.57% over the last twelve months.

Another one that should thrive is McDonald’s Corporation (NYSE:MCD). The chain isn’t famous for giving you healthy meals, but it is possible to eat there cheaply. The company has had a few bits of bad news over the last six months with soft year-over-year sales numbers, but international expansion continues to make it profitable with a 19.82% net margin in 2012. Shares have only grown 3% over the last year, though that hides the fact that they’ve grown 11.17% in the last three months, finally outpacing the market as a whole. A 3.02% dividend yield is handy as well.

A smaller amount of disposable income is going to be rough on companies that sell things people want but don’t need. Over the long term, the removal of a small piece of income from a lot of wallets will damage spending on luxury items.

Like, say, Apple Inc. (NASDAQ:AAPL). Apple makes great products, but they’re pricey. Even with the hints of a cheaper iPhone, cutting back on spendable cash will cut off some of the demand for the company’s products. I don’t think it will tank Apple’s sales completely, or its share price. The company remains insanely profitable and poised for a real resurgence after its shares tanked late last year, but the growth will be lower than one might otherwise expect.  It is not a crime — regardless of what the yammering class thinks — to have an operating margin that’s only 31.57% or to have a EPS of only 44.10.  Most other firms would love to see that, but they’re not Apple Inc. (NASDAQ:AAPL), so they’re not held to an insane standard.

Apple Store Boylston Street: This Apple Store Closes Its Doors After Boston...SanDisk Corporation (SNDK): Be Prepared, This Stock Could Jump After Earnings...