Corning Incorporated (GLW), Microsoft Corporation (MSFT): Is There Hope For This Company?

As prices of LCD displays have fallen over the past few years Corning Incorporated (NYSE:GLW), a leading supplier of the glass used is such displays, has suffered. Net income began declining in 2011 and continued to decline in 2012, with the EPS for 2012 about half of the EPS for 2010.

Although the company has been diversifying its revenue stream, most of the company’s profits come from its LCD glass business, and profit in this segment has been falling. A morsel of good news came in the fourth quarter of 2012, though, as quarterly EPS adjusted for special items rose year-over-year for the first time in two years.

Corning Incorporated (NYSE:GLW) has done very little in the past year and currently trades for about $13 per share. 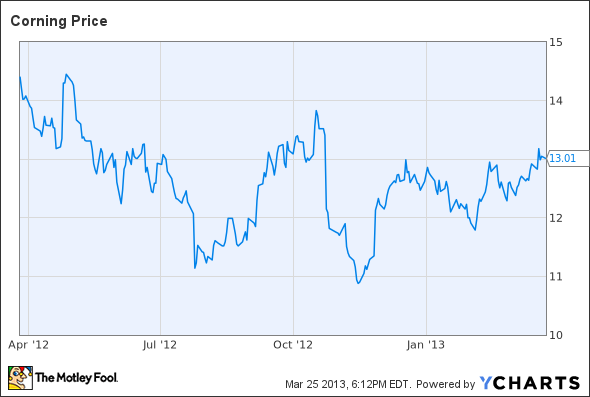 With the glimmer of hope that a bottom has been reached in terms of profitability, is Corning a good investment?

A look at earnings

In 2012 Corning Incorporated (NYSE:GLW) recorded revenue of $8 billion, up just 1.5% from 2011, and net income of $1.7 billion, down 38% from 2011. This severe drop in net income was caused mainly by the performance of the display technologies division, which is responsible for LCD glass. Revenue for this division fell 7.5% to $2.9 billion and net income fell 31.8% to $1.6 billion. Almost all of Corning’s profits come from this division, and the declines are clearly not a good sign.

The numbers above would suggest that the margins for this division are extremely high. In fact, this is due to the way in which Corning accounts for its joint ventures. Corning owns 50% of Samsung Corning Precision Materials, 50% of Dow Corning, and varying percentages of a few other companies. The revenue of these companies are not reported on Corning’s income statement, but its share of the net income is. This makes the margins appear quite a bit higher than they actually are. Corning’s share of the total revenue from its joint ventures totaled about $5.3 billion, while its share of the net income, which is already part of the reported net income, was $810 million. So the “effective” revenue for the company was actually $13.3 billion, putting the net income margin at 12.8% instead of 21.2%, as the income statement suggests.

Specialty materials contains Gorilla Glass, which is the durable glass used in many smartphones and tablets. Because of Gorilla Glass’s popularity this division has more than doubled its revenue since 2010 and subsequently become profitable. Although much attention is paid to this product, its contribution to profits is still small, albeit quickly growing.