Corning Incorporated (GLW), AVG Technologies NV (AVG): Here’s Why You Should Be Bullish

Quarterly earnings results give investors looking for investment ideas additional information for analysis. In the volatile technology sector, the stocks of companies reporting profits and sales that are better than anticipated will naturally go up.

When Corning Incorporated (NYSE:GLW) reported good results, the stock rose by around 10% from about $13 per share to close recently at $14.23. Akamai Technologies, Inc. (NASDAQ:AKAM) rose 27%, while AVG Technologies NV (NYSE:AVG) gained 23%.

For investors who don’t own these companies, are these stocks still buys, despite the easy money already being made? Should investors generating paper gains be selling? 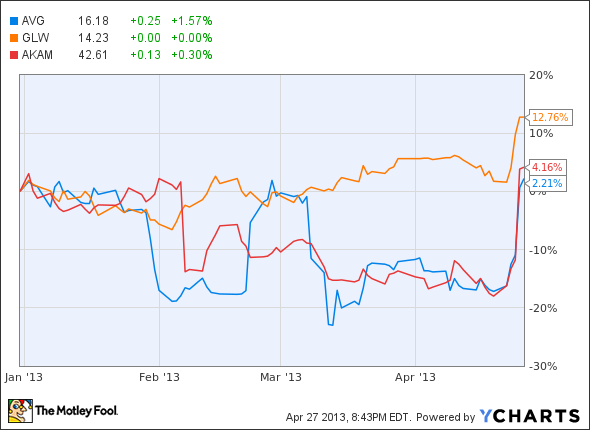 Corning Incorporated (NYSE:GLW) announced it would buyback $2 billion of its own shares. The company originally had a $1.5 billion buyback plan that expired at the end of 2012, so the plan is being renewed. To further increase shareholder returns, the company is increasing its dividend by 11.1% to $0.10 per share per quarter. This would raise the dividend yield to 2.8%.

The earnings beat also translates to an improvement in key metrics:

The higher operating and net profit margins for the quarter supports a view that the company is not facing any serious competition that would hurt demand or pressure its pricing model.

A number of key metrics improved for AVG in the quarter:

Net profit margins nearly doubled, as did return on assets. The shifting focus from desktop to mobile software by AVG Technologies NV (NYSE:AVG) is clearly having a positive impact on performance.

Corning Incorporated (NYSE:GLW) beat earnings estimates as gross margins improved to 43%. Sales were higher for LCD units, up 7%, while life-sciences sales rose by 34% due to acquisitions. Weakness was found in optical-fiber sales, which dropped 7% from last year, and specialty-materials sales, which declined 10%. The latter unit is responsible for selling Gorilla Glass.