Constellation Brands, Inc. (NYSE:STZ) recently acquired the U.S. beer business of Grupo Modelo from Anheuser-Busch InBev NV (ADR) (NYSE:BUD) for $4.75 billion. Is this a good deal or a bad one, and how will if affect the stock price going forward?

Constellation Brands is kind of a big deal 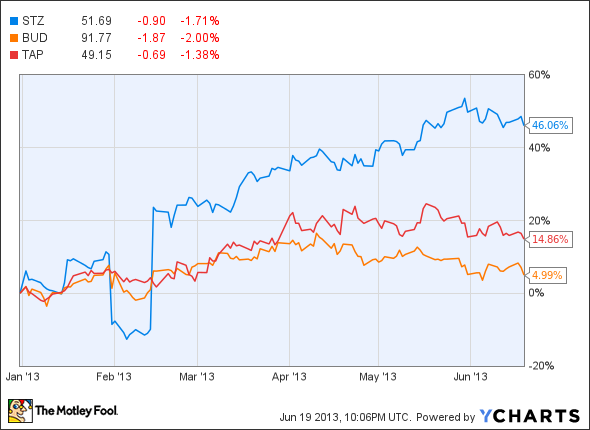 But you don’t care about the past, right? It’s all about future potential. Considering recent acquisitions and deals made by Constellation Brands, Inc. (NYSE:STZ), its future growth potential looks good.

In addition to this massive deal, Constellation Brands, Inc. (NYSE:STZ) has reached an agreement with several of Brazil’s top distributors. The timing here is excellent. Brazil is hosting the 2014 World Cup and 2016 Summer Olympics. Constellation Brands is promoting key brands in Brazil, setting itself up for massive sales once the games begin.

Constellation Brands made these deals in part to address its biggest concern: annual revenue declines. Revenue increased 10.80% last quarter on a year over year basis, on higher volumes and improved product mix. Thanks to the recent deals referred to above, perhaps the company can build on this growth.

As far as earnings are concerned, Constellation Brands has delivered a profit in four consecutive years. Earnings have declined over the past two years, but profits were still very respectable. Earnings declined 20.70% last quarter year over year, but this was mostly due to tax rates and interest related to transactions.

As mentioned earlier, Constellation Brands has outperformed peers by wide margins year to date. It has also outperformed over one-year and three-year time frames. But what about valuations? 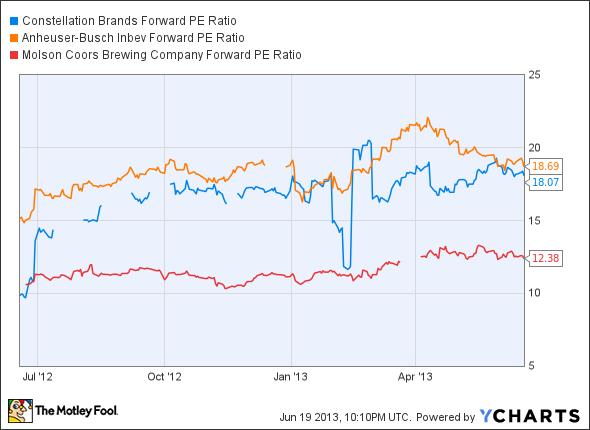 Molson Coors Brewing Company (NYSE:TAP) looks the most appealing by this metric, but how do these three companies stack up in profit margin?

As the chart below indicates, profit margin for Constellation Brands has improved over the past five years.