Consolidated Edison, Inc. (ED): The Stock Is Going Nowhere, and Here’s Why

Electric utilities have never been the most exciting opportunities in the stock market, but lately, one stock in the group has been underperforming the stock market as a whole, and performing particularly poorly relative to its peers to boot: Consolidated Edison, Inc. (NYSE:ED). Why? 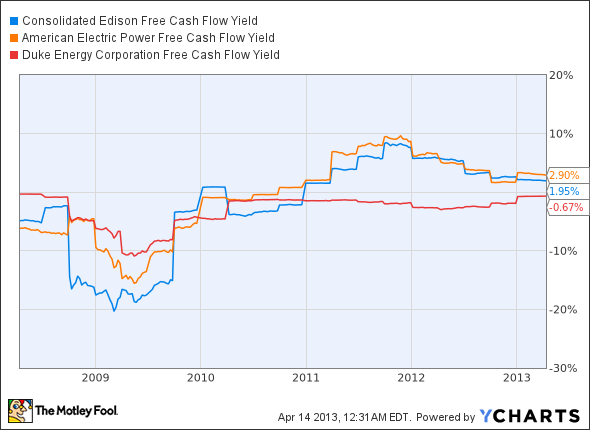 Given this, and with ConEd selling for only a 16 P/E, versus higher price-to-earnings ratios at both of its peers, you might start thinking that paying a little less for Consolidated Edison stock’s middle-of-the-road dividend is a pretty bright idea.

But that would be a mistake.

Consolidated Edison, Inc. (NYSE:ED) is losing its way
Take a closer look at that chart, and you may notice that while Consolidated Edison stock does generate decent cash relative to its peers, the rate of that cash production — a mere 2% — isn’t all that great, objectively speaking. That small trickle of cash doesn’t give ConEd a lot to work with as far as stock buybacks and dividend increases go. You may also notice that ConEd’s free cash flow yield is starting to trend downward.

Of course, that’s only to be expected, given how ConEd’s sales have been shrinking lately.

Consolidated Edison, Inc. (NYSE:ED) is going nowhere
The future doesn’t look particularly bright for Consolidated Edison stock, either. Over the next five years, most analysts who follow this industry expect to see ConEd grow its profits at barely half the rate of its peers — again, limiting the potential for dividend increases, share buybacks, or profits for its shareholders.

Fool contributor Rich Smith and The Motley Fool have no position in any of the stocks mentioned.