ConocoPhillips (NYSE:COP) has reported results for the fourth quarter of 2012 and the full year, and this gives us the opportunity to evaluate the company as a pure up stream play after it spun off its downstream operations as Phillips 66 (NYSE:PSX). The focus of this article will be on the performance of the company without the cushion of downstream earnings in a year when refining margins were strong because of relatively cheap crude oil prices. 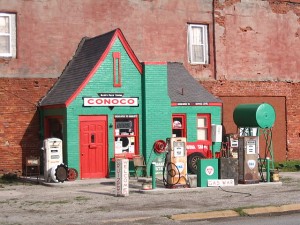 At the end of 2012, preliminary proved reserves are 8.6 billion barrels of oil equivalent (BOE). Proved organic reserve additions for the year are projected to be 942 million BOE, which represents an organic reserve replacement ratio of 156% of production during the year, including fuel gas. Sales for 2012, net of purchases, amounted to 83 million BOE representing a total reserve replacement ratio of 142%.

Cash generated from continuing operating activities for the quarter was $3.87 billion. Excluding an increase in working capital of $0.37 billion, the company generated $4.24 billion in cash from operations. Of this, $3.6 billion was used on capital expenditures and $0.8 billion on dividend payments. During the fourth quarter, debt rose by $0.6 billion because of the placement of $2 billion in low-interest debt. As of Dec. 31, 2012, the company held debt of $21.7 billion and the debt-to-capital ratio was 31%. The company had $3.62 billion of cash and cash equivalents and $0.75 billion in restricted cash reserved for dividends.

ConocoPhillips (NYSE:COP) is aiming to use cash, debt and asset sales to fund future capital expenditure and dividends until production increases as a result of its investments. It expects capital expenditure of about $16 billion a year from 2013 to 2017, and spent more than $3 billion last year on its dividend with the intention of paying consistent dividend increases.  In 2013, the company expects to generate $9.6 billion from asset sales, which it has already announced. Continuing operations generated a little less than $15 billion in cash flow last year, and the company’s investments will create $6 billion to $7 billion of cash flow in the future, so that cash flow may be around $22 billion by 2017 at current energy prices.

Ken Stern: What’s Wrong With the Charitable Sector, How to Fix It –...

Profit From The Coming U.S. Oil Boom With These Stocks: Chevron Corporation...

The 2 Stocks Behind the Dow’s Gains This Morning: International Business...

Energy Stocks Down On Their Luck; Consider These 3: ConocoPhillips (COP), Occidental...
Monthly Newsletter Strategy
Download a free copy of our newsletter and see the details inside!
Hedge Fund Resource Center
Billionaire Hedge Funds