Healthcor Management LP, managed by Arthur B. Cohen and Joseph P. Healey, has revealed a large new passive position in Conatus Pharmaceuticals Inc (NASDAQ:CNAT) of just over 1.0 million shares, giving it a 5.22% stake in the biotechnology company. The date of event which required filing of the new position was April 6, two days before Conatus announced the completion of its underwritten public offering of 4.55 million shares, which included the full exercise of the underwriters’ option to purchase an additional 525,000 shares. All told, the offering is expected to raise approximately $21.4 million, which Conatus Pharmaceuticals Inc (NASDAQ:CNAT) will use to help fund the clinical development of its liver disease treatment emricasan, its lead compound, in addition to other corporate purposes.

We don’t just track the latest moves of funds at Insider Monkey. We are, in fact, more interested in their 13F filings, which we use to determine the top 15 small-cap stocks held by the funds we track. We gather and share this information based on 16 years of research, with backtests for the period between 1999 and 2012 and forward testing for the last 2.5 years. The results of our analysis show that these 15 most popular small-cap picks have a great potential to outperform the market, beating the S&P 500 Total Return Index by nearly one percentage point per month in backtests. Moreover, since the beginning of forward testing iat the end of August 2012, the strategy worked splendidly, outperforming the market every year and returning 137.7% through April 14, which is more than 80 percentage points higher than the returns of the S&P 500 ETF (SPY) during the same period (see more details).

The stake by Healthcor represents a big vote of confidence in Conatus Pharmaceuticals Inc (NASDAQ:CNAT) and its treatment candidate, a presentation on which you can find below, which was released yesterday at the Needham 14th Annual Healthcare Conference. On March 26 Conatus release positive top-line results from a Phase 2 double-blind, placebo-controlled clinical trial of emricasan, which caused shares to spike by more than 33% in trading over the next two days, though they quickly gave back the gains. Conatus is expected to release further results and data on emricasan at the 50th Annual Meeting of the European Association for the Study of the Liver (EASL) being held April 22-26, 2015, in Vienna Austria.

Since its IPO in the summer of 2013, Conatus Pharmaceuticals Inc (NASDAQ:CNAT) has had fairly limited investment from the funds in our database, with Polar Capital and Adage Capital being two of a handful of funds to ever have notable positions in it. Each of those funds has since greatly reduced their stakes in Conatus Pharmaceuticals. In fact, the nearly $6 million investment from Healthcor more than triples the total invested capital in the company from funds we track.

Conatus would be hard-pressed to find a better healthcare-focused fund to bless it with a vote of confidence, as Healthcor has been on a roll with its top picks, and particularly its most recent picks. Healthcor’s 34 picks at the end of 2014 in companies with a market cap of at least $1 billion had weighted average returns of 19.8% in Q1, making Healthcor the 14th best-performing fund in our database to start 2015. Its picks in $1 billion+ companies have also returned 37% over the past calendar year.

Among other things, Healthcor’s top healthcare picks at the end of 2014 included large new positions in Pfizer Inc. (NYSE:PFE), Gilead Sciences, Inc. (NASDAQ:GILD), and Valeant Pharmaceuticals Intl Inc (NYSE:VRX) during Q4, which the fund had a collective exposure to of 17% coming into 2015. All three of those new positions had strong first quarter returns, with Gilead Sciences, Inc. (NASDAQ:GILD) up by 4.11%, Pfizer Inc. (NYSE:PFE) by 12.66%, and Valeant Pharmaceuticals Intl Inc (NYSE:VRX) gaining a hefty 38.79%. Its top pick, Mallinckrodt PLC (NYSE:MNK) also had a big quarter, returning 27.89%.

Check out Conatus Pharmaceutical’s presentation on the following pages. 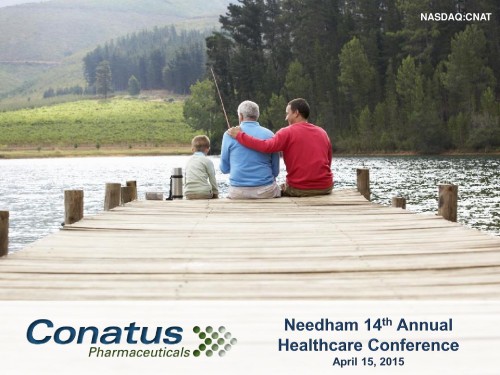