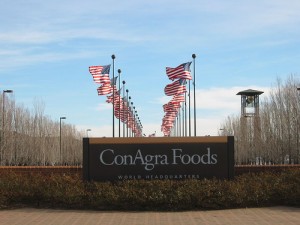 Recently, the New York Times reported on a detailed Rotary Gallop analysis that identified publicly traded companies that could be vulnerable to takeovers by activist investors. Although the analysis did not attempt to predict the likelihood of a takeover in any specific circumstance, it did comment on the likelihood of a theoretical takeover attempt’s success.

The report found five particularly vulnerable companies: ConAgra Foods, Inc. (NYSE:CAG), Consolidated Edison, Inc. (NYSE:ED), Tyco International Ltd. (NYSE:TYC), Fifth Third Bancorp (NASDAQ:FITB) and Ameren Corp (NYSE:AEE). This list might surprise many investors. After all, most of these firms have reputations for stability and good governance however this might not be enough to insulate them from potential takeovers.

Investing in potential acquisition targets is always a risky business. Investors can use the following rundown as a starting point for further research into the investment-worthiness of these five firms.

ConAgra Foods, Inc. (NYSE:CAG) is a major grain and livestock processor that operates on a global basis. The company has fairly strong finances and is widely regarded as a top pick for conservative, retirement-focused investors. The company earned a little less than $500 million on 2012 revenues of approximately $14.2 billion. Altogether, this added up to a profit margin of just over 3 percent. Since these margins are somewhat low relative to the company’s peers, it seems reasonable that an activist investor would be interested in the company.

It is a classic power utility that provides electricity and heating services to customers in the New York City area. It uses oil, natural gas and other means to fire its plants. The company’s finances are in good shape, and it yields a healthy 4 percent. In 2012, Consolidated Edison, Inc. (NYSE:ED) earned approximately $1.1 billion on $12.2 billion gross revenues. Although its return on equity is lackluster at just 10 percent, this is par for the course for a utility company. While boasting acceptable financial performation, Consolidated Edison, Inc. (NYSE:ED) is heavily indebted, carrying over $11 billion in long-term debt and just $395 million in cash. This could be a factor in any potential activist takeover.

Switzerland-based Tyco International Ltd. (NYSE:TYC) is a diverse conglomerate that does a significant amount of business in the healthcare industry. The company’s finances are not in great shape, but some of its recent weakness may have to do with an ongoing acquisition spree. In 2012, Tyco International Ltd. (NYSE:TYC) lost $270 million on about $10.5 billion gross revenues. Although it has $3 in debt for every $1 in cash on hand, it does enjoy an excellent free cash flow of nearly $900 million. Accordingly, it might be fair to bet on a turnaround in its fortunes.