Most dividend investors look for low price-to-earnings multiples, high yields, safety, and growth. Verizon Communications Inc. (NYSE:VZ) offers all of the above.

This article examines the investment opportunity at Verizon Communications.

The company is generating strong free cash flow, and the dividend yield is high at 4.5%. Verizon’s high dividend yield makes it Warren Buffett’s 2nd (out of 20) highest dividend holding.

Mr. Buffett was one of the 61 investors tracked by Insider Monkey which were long Verizon on March 31, up from 52 on December 31. Those 61 investors held $2.80 billion worth of the company’s shares at the end of March, led by Mr. Buffett’s 15.00 million-share position. Arrowstreet Capital opened a large Verizon position during the first quarter, amounting to 7.96 million shares at the end of the quarter.

The company’s free cash flow in the first quarter of 2016 was at $4.0 billion while paid dividends were at $2.3 billion. As such, the free cash flow payout ratio in the quarter was at 57.5%. 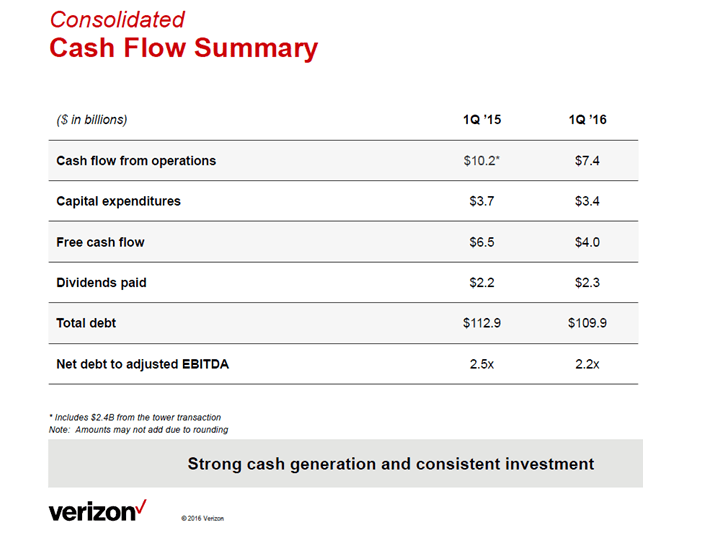 Verizon shares are facing pressure from the strike by Verizon union workers, which may negatively impact the second quarter results. However, in my opinion, management and unions will reach an agreement sooner or later, and the strike would not have long time impact on the company’s growth prospects.

According to USA TODAY news item from May 17, Verizon and striking union officials will remain at the bargaining table in Washington this week. Senior leaders of the telecommunications giant and the Communications Workers of America and International Brotherhood of Electrical Workers met Tuesday with Labor Secretary Tom Perez and federal mediator Allison Beck and plan to continue talks.

Nearly 40,000 Verizon employees who are members of the unions went on strike April 13. The most recent labor contract expired August 1, 2015. The unions have criticized Verizon for outsourcing jobs and requiring some workers to relocate while Verizon officials say compromises on benefits are needed to tame costs.

The company posted revenue of $32,171 million in the period, missing the consensus estimate of $34,406 million. Excluding the acquisition of AOL, which was not part of Verizon a year ago, revenues declined by 1.5% year over year.

The decline was due to lower wireless phone activations on device installment sales, lower upgrades, and the ongoing migration of its customer base to unsubsidized pricing. In wireline, the higher growth of Internet-only activations and smaller video bundles also pressured revenue growth. 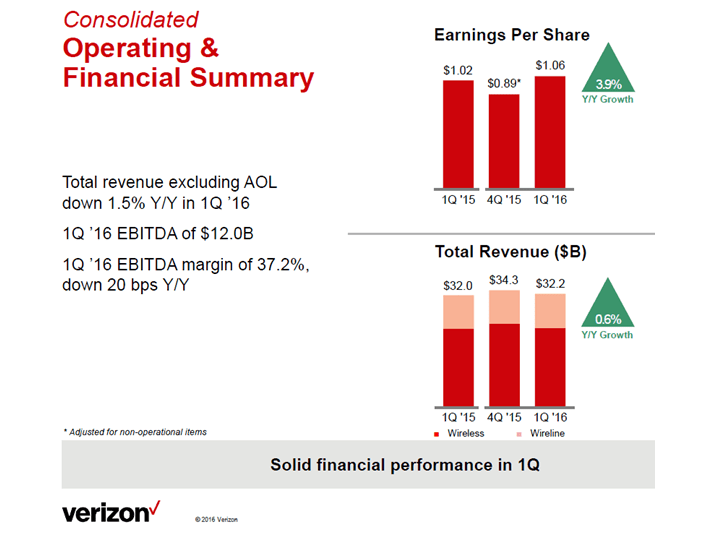