Commodities in 2013: 2 Ways to Cash in on the Increasing Food Demand

As I mentioned before, changing global climate has wrought havoc on the agricultural sector during the past year. Drought in the United States has stunted the yields of many crops, while unusual weather patterns elsewhere in the world led to sharp spikes — and drops — in farm yields across Asia, Latin America and Europe.

Yet it’s unwise to pay too close attention to these near-term events. Instead, focus on the clear long-term trend in place for global agriculture: Millions more people are joining the middle class in fast-growing places such as China, Brazil and India, and there is a global push to ensure crop yields are maximized to meet this rising demand.

And the most surefire way to maintain robust farm output is through the judicious use of fertilizer. There are several key components to fertilizer, most notably potash and phosphate, both of which help soil to stimulate the ideal growing conditions for healthy crops.

The oligopoly pricing
Just a handful of companies around the world control the production of key fertilizers such as potash and phosphate. For example, the top 10 producers of potash control 85% of the entire global market. In effect, it is an oligopolistic market. This means the fertilizer industry’s output is often tightly controlled, so pricing — to an extent — is managed. I say “to an extent” because demand also affects pricing, and the cost of items such as phosphate and potash can swing from year-to-year. 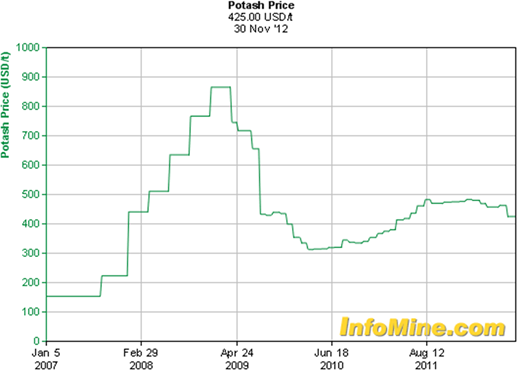 If you took a broad snapshot of the global agricultural market, then you’d find that expected growing conditions in 2013 will be “fair to good,” with pricing for fertilizer at or slightly above historical trends. For example, potash prices are likely to remain in a range of $450 to $500 per ton.

The outlook for phosphate pricing is a bit firmer, in part because the Moroccan government has sought to keep a lid on phosphate output in that country, which is the world’s largest producer of this fertilizer raw material. As the chart below shows, phosphate prices have been steadily rising in the past few years thanks to tight supply. 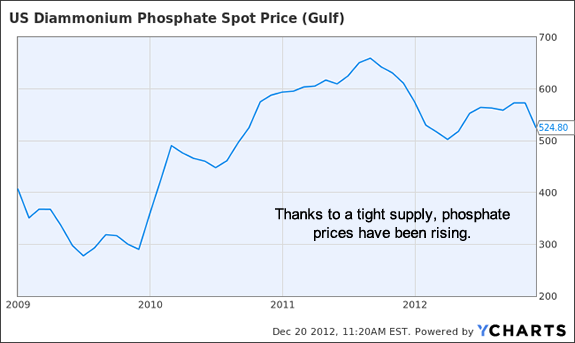 One of the few companies to have a hand in both of these chemicals is Mosaic Co (NYSE:MOS), which controls roughly 13% of the phosphate and potash markets. Mosaic’s market share in potash is set to soar thanks to expansion plans that will boost output capacity by 2.8 million tons and more plans to develop an additional 1.3 million tons of capacity. Mosaic is also pursuing similar, albeit more modest expansions in its phosphate production.

10 Commodity Stocks Yielding up to 10%

Amazon.com, Netflix and 8 Other Overvalued Stocks in the S&P 500
Monthly Newsletter Strategy
Download a free copy of our newsletter and see the details inside!
Hedge Fund Resource Center
Billionaire Hedge Funds