Walt Disney’s magic vision and emphasis on “imagineering” (the blending of creative imagination with technical know-how) took The Walt Disney Company (NYSE:DIS) from a bankrupt studio in 1927 to a powerful media empire worth billions.

But after several decades in the same business, The Walt Disney Company (NYSE:DIS) may be in trouble. On its recent earnings call, losses on projects like The Lone Ranger (a writedown of $160-$190 million) got immediate attention from investors and caused the stock to drop slightly. But does this mean that the magic of Disney is gone? 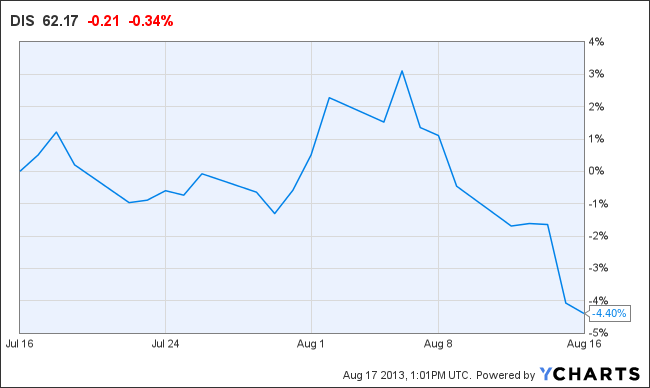 These assets explain why The Walt Disney Company (NYSE:DIS)’s overall sales still increased 4% after the movie studio saw a 2% decline in revenue. The park business grew 7% due to price increases and attendance growth. Therefore, the decline in share price after the earnings report should only be temporary. Most investors probably see Disney as a movie studio, but time will show that Disney is more than just movies. In the meantime, Disney’s current valuation could be an entry point for investors in search of exposure to the entertainment industry.

By owning a great amount of safe, valuable assets (from real estate to media channels), the company has made its cash flow strong and stable. Its media business is the most important segment, generating more than half of the company’s operating profit, which is supported by some well-established studios like Pixar, Marvel, and Lucasfilms (acquired in October last year for $4.05 billion). Parks and resorts revenue for the quarter also increased 7% (operating income for this segment was up 9%) due to increased guest spending and attendance at Disney World and Disneyland. The poor performance of the Studio Entertainment business did not influence the other units.

More blockbusters on the way

The Studio Entertainment unit had a tough quarter, but conditions could change. Disney has a strong global brand and a vast library of animated content. It also owns Pixar, and under John Lasseter, Pixar has been able to develop very successful films without using Disney’s main characters. The latest movies produced by Disney include plenty of hits. The Iron Man series, for example, earned more than $2 billion dollars at the box office. With Star Wars films in the pipeline, I expect this business unit to recover in the next two quarters. This would suggest that The Lone Ranger is an exception to the rule of Disney’s success.

Comcast Corporation (NASDAQ:CMCSA), the owner of Universal Studios, is excellent at producing big hits. Fast & Furious 6 had the second-biggest opening of the year so far, only behind Disney’s Iron Man 3. By the time Disney released The Lone Ranger, Comcast had released Despicable Me 2. Disney only obtained $48.9 million in the first five days after the debut of The Lone Ranger. Despicable Me 2 generated as much as $142 million for Comcast in the same time frame. The performance of Comcast Corporation (NASDAQ:CMCSA) and Disney are heavily correlated, showing the similarity of their businesses. There are some crucial differences, however. Comcast’s earnings have been flat for the past six months. Also, as the biggest cable provider in the United States, Comcast is exposed to a mature market. Cable exposure poses strong limitations to Comcast’s revenue growth, as consumers shift to Internet-based video distribution.