The government requires hedge funds and wealthy investors with over a certain portfolio size to file a report that shows their positions at the end of every quarter. Even though it isn’t the intention, these filings level the playing field for ordinary investors. The latest round of 13F filings disclosed the funds’ positions on September 30. We at Insider Monkey have made an extensive database of more than 700 of those elite funds and prominent investors’ filings. In this article, we analyze how these elite funds and prominent investors traded Colliers International Group Inc (NASDAQ:CIGI) based on those filings.

Colliers International Group Inc (NASDAQ:CIGI) shares haven’t seen a lot of action during the third quarter. Overall, hedge fund sentiment was unchanged. The stock was in 11 hedge funds’ portfolios at the end of the third quarter of 2018. At the end of this article we will also compare CIGI to other stocks including Floor & Decor Holdings, Inc. (NYSE:FND), Fulton Financial Corp (NASDAQ:FULT), and Vishay Intertechnology, Inc. (NYSE:VSH) to get a better sense of its popularity. 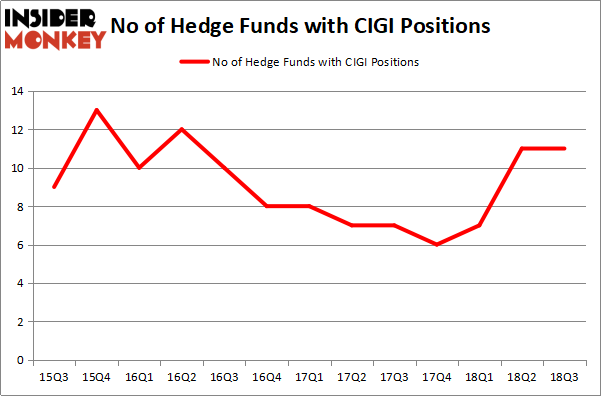 The largest stake in Colliers International Group Inc (NASDAQ:CIGI) was held by BloombergSen, which reported holding $169.5 million worth of stock at the end of September. It was followed by Renaissance Technologies with a $70.2 million position. Other investors bullish on the company included Waratah Capital Advisors, Two Sigma Advisors, and D E Shaw.

We view hedge fund activity in the stock unfavorable, but in this case there was only a single hedge fund selling its entire position: Millennium Management. One hedge fund selling its entire position doesn’t always imply a bearish intent. Theoretically a hedge fund may decide to sell a promising position in order to invest the proceeds in a more promising idea. However, we don’t think this is the case in this case because only one of the 800+ hedge funds tracked by Insider Monkey identified as a viable investment and initiated a position in the stock (that fund was BlueCrest Capital Mgmt.).

As you can see these stocks had an average of 20.25 hedge funds with bullish positions and the average amount invested in these stocks was $398 million. That figure was $275 million in CIGI’s case. Floor & Decor Holdings, Inc. (NYSE:FND) is the most popular stock in this table. On the other hand Fulton Financial Corp (NASDAQ:FULT) is the least popular one with only 12 bullish hedge fund positions. Compared to these stocks Colliers International Group Inc (NASDAQ:CIGI) is even less popular than FULT. Considering that hedge funds aren’t fond of this stock in relation to other companies analyzed in this article, it may be a good idea to analyze it in detail and understand why the smart money isn’t behind this stock. This isn’t necessarily bad news. Although it is possible that hedge funds may think the stock is overpriced and view the stock as a short candidate, they may not be very familiar with the bullish thesis. In either case more research is warranted.