Cognizant Technology Solutions Corporation (NASDAQ:CTSH) was in 40 hedge funds’ portfolios at the end of September. CTSH shareholders have witnessed an increase in enthusiasm from smart money lately. There were 33 hedge funds in our database with CTSH positions at the end of the previous quarter. Our calculations also showed that CTSH isn’t among the 30 most popular stocks among hedge funds.

Unlike the largest US hedge funds that are convinced Dow will soar past 40,000 or the world’s most bearish hedge fund that’s more convinced than ever that a crash is coming, our long-short investment strategy doesn’t rely on bull or bear markets to deliver double digit returns. We only rely on the best performing hedge funds‘ buy/sell signals. We’re going to take a peek at the recent hedge fund action encompassing Cognizant Technology Solutions Corporation (NASDAQ:CTSH). 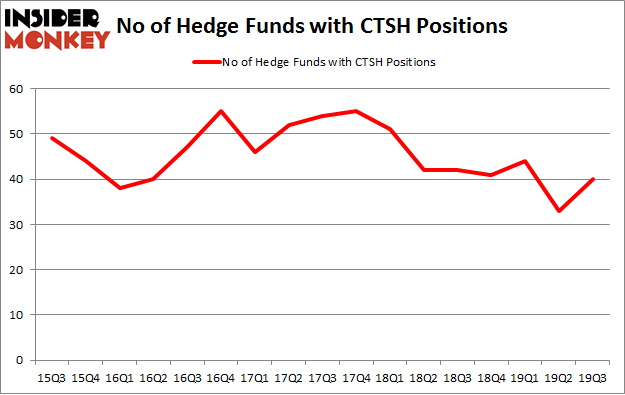 With a general bullishness amongst the heavyweights, key hedge funds have been driving this bullishness. Kensico Capital, managed by Michael Lowenstein, established the biggest position in Cognizant Technology Solutions Corporation (NASDAQ:CTSH). Kensico Capital had $56.6 million invested in the company at the end of the quarter. Matthew Tewksbury’s Stevens Capital Management also made a $8.5 million investment in the stock during the quarter. The following funds were also among the new CTSH investors: Michael Kharitonov and Jon David McAuliffe’s Voleon Capital, David Harding’s Winton Capital Management, and Ray Dalio’s Bridgewater Associates.

As you can see these stocks had an average of 34.75 hedge funds with bullish positions and the average amount invested in these stocks was $1847 million. That figure was $2369 million in CTSH’s case. eBay Inc (NASDAQ:EBAY) is the most popular stock in this table. On the other hand China Unicom (Hong Kong) Limited (NYSE:CHU) is the least popular one with only 8 bullish hedge fund positions. Cognizant Technology Solutions Corporation (NASDAQ:CTSH) is not the most popular stock in this group but hedge fund interest is still above average. Our calculations showed that top 20 most popular stocks among hedge funds returned 34.7% in 2019 through November 22nd and outperformed the S&P 500 ETF (SPY) by 8.5 percentage points. Hedge funds were also right about betting on CTSH, though not to the same extent, as the stock returned 5.2% during the fourth quarter (through 11/22) and outperformed the market as well.