Want your mind blown? The Motley Fool Rulebreakers released this report revealing the significance of what has now become referred to as “the cloud.” Give it a read.

What is the cloud?

To be clear, the definition of cloud computing is sometimes still debated among investing and technological professionals. In short, though, cloud computing is a new industry where services are offered and delivered via a network, primarily the internet. Most all firms providing cloud computing services utilize rental or pay as you models for charging users.

Following are 3 of some of the most utilized services:

Does the following image excite you?

A study performed by the global market intelligence firm IDC indicates that between 2012 and 2016 public IT services will boast a 26.4% annual compound growth rate. Also, consider what we experienced in 2011 when the First Trust ISE Cloud Computing Index Fund, the first ETF for the cloud computing space was born. This fund includes small tech startups to the behemoths Microsoft Corporation (NASDAQ:MSFT), Google Inc (NASDAQ:GOOG), Apple, and Oracle. While more detailed information about the fund can be found here, investors should anticipate that this ETF will grow with the demand for cloud computing services.

Let’s look at the big three:

Amazon.com, Inc. (NASDAQ:AMZN) is dominating the industry. In 2006, Amazon released Amazon Web Services (AWS), a platform that enables users to run virtually any application in the cloud. McKinsey & Co. released a report stating that users would only be charged about $16 a month using AWS compared to $31.50 a month to buy and maintain a server. Forrester Research estimates that Amazon claims about 70% of the market for renting computing capacity and data.

Additionally, Amazon is now re-positioning itself to sell its services to large companies which historically own their hardware—directly attacking Microsoft.  However, Amazon has a much lower ROE than Google and Microsoft. The phenomenon is explained by its low profit margin. It posted a $39 million loss in 2012. Remarkably, Amazon reported total sales over $61 billion, up $13 billion from 2011. Overall, Amazon’s sales have quadrupled over the past 4 years.

Basically, Amazon is rapidly growing at the expense of generating profits. To date, this strategy has not seemingly hurt the giant. But, it won’t last long. 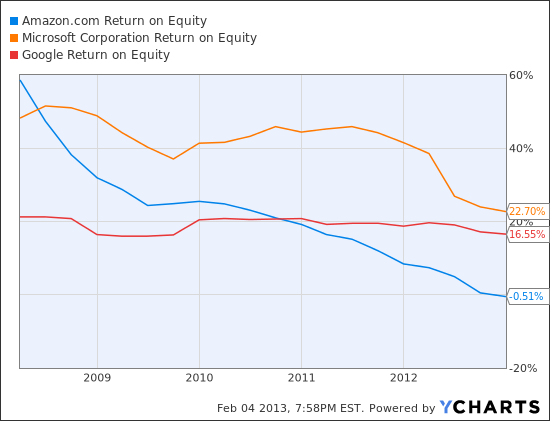