Hedge Funds and other institutional investors have just completed filing their 13Fs with the Securities and Exchange Commission, revealing their equity portfolios as of the end of September. At Insider Monkey, we follow over 700 of the best-performing investors and by analyzing their 13F filings, we can determine the stocks that they are collectively bullish on. One of their picks is Clementia Pharmaceuticals Inc. (NASDAQ:CMTA), so let’s take a closer look at the sentiment that surrounds it in the current quarter.

Is Clementia Pharmaceuticals Inc. (NASDAQ:CMTA) an excellent investment right now? Investors who are in the know are in a pessimistic mood. The number of bullish hedge fund bets were cut by 1 recently. Our calculations also showed that CMTA isn’t among the 30 most popular stocks among hedge funds.

In the eyes of most traders, hedge funds are assumed to be slow, outdated financial vehicles of yesteryear. While there are over 8,000 funds in operation today, Our experts look at the upper echelon of this group, approximately 700 funds. These hedge fund managers oversee most of the hedge fund industry’s total capital, and by shadowing their inimitable picks, Insider Monkey has found a number of investment strategies that have historically outperformed the broader indices. Insider Monkey’s flagship hedge fund strategy outpaced the S&P 500 index by 6 percentage points per annum since its inception in May 2014 through early November 2018. We were able to generate large returns even by identifying short candidates. Our portfolio of short stocks lost 24% since February 2017 (through December 3rd) even though the market was up nearly 23% during the same period. We just shared a list of 11 short targets in our latest quarterly update. 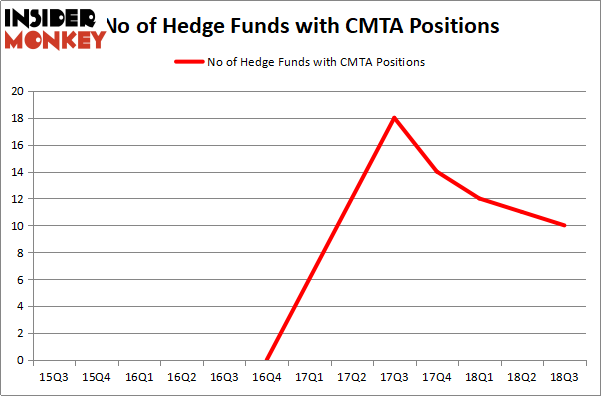 The largest stake in Clementia Pharmaceuticals Inc. (NASDAQ:CMTA) was held by OrbiMed Advisors, which reported holding $116.2 million worth of stock at the end of September. It was followed by Baker Bros. Advisors with a $21.6 million position. Other investors bullish on the company included Driehaus Capital, Rock Springs Capital Management, and Partner Fund Management.

Because Clementia Pharmaceuticals Inc. (NASDAQ:CMTA) has experienced bearish sentiment from hedge fund managers, logic holds that there lies a certain “tier” of hedgies who were dropping their positions entirely last quarter. At the top of the heap, Anand Parekh’s Alyeska Investment Group cut the largest stake of the 700 funds followed by Insider Monkey, worth about $3 million in stock. D. E. Shaw’s fund, D E Shaw, also said goodbye to its stock, about $0.2 million worth. These moves are important to note, as aggregate hedge fund interest dropped by 1 funds last quarter.

As you can see these stocks had an average of 8.5 hedge funds with bullish positions and the average amount invested in these stocks was $57 million. That figure was $160 million in CMTA’s case. Landcadia Holdings, Inc. (NASDAQ:LCAHU) is the most popular stock in this table. On the other hand Loop Industries, Inc. (NASDAQ:LOOP) is the least popular one with only 1 bullish hedge fund positions. Clementia Pharmaceuticals Inc. (NASDAQ:CMTA) is not the most popular stock in this group but hedge fund interest is still above average. This is a slightly positive signal but we’d rather spend our time researching stocks that hedge funds are piling on. In this regard LCAHU might be a better candidate to consider a long position.