Some have suggested that the price of oil could rise to over $150 a barrel, which would be above the all-time high it set at the dawn of the financial crisis. As it did then, an oil price spike of that magnitude would send shock waves through the still fragile, global economy.

And while this could happen, the key is that oil will remain volatile. Natural gas prices, however, are much more local, and while volatile, has less impact on the price at the pump. Factor in the much lower cost of natural gas-per-gallon equivalent, and there’s a strong incentive for shippers to move away from diesel, and toward natural gas. Are there investing opportunities to be had? Let’s take a look.

The value of predictability and stability
Below are the spot prices of both crude oil and natural gas from the beginning of 1997: 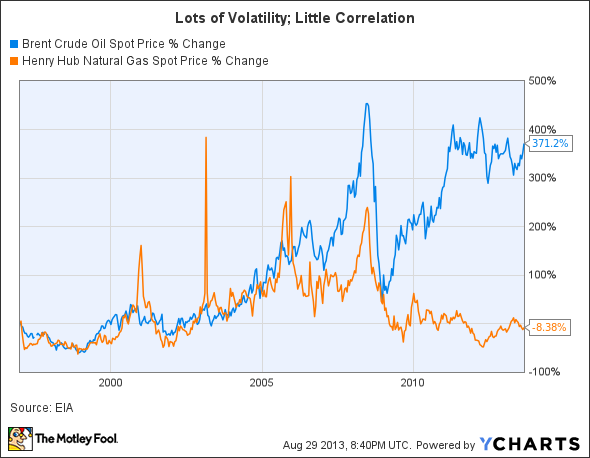 Both fuels have large amounts of volatility. However, natural gas’ volatility is a product of domestic conditions, while oil prices are based on the international market. Domestic natural gas price fluctuation is a product of supply and demand, where oil prices have been, in many cases, driven by political factors, specifically OPEC’s control over a significant amount of the world’s supply. And while oil has continued to trend higher over the past 16 years, natural gas is actually cheaper today than it was in 1997.

Natural gas’ secret weapon: It doesn’t matter as much

Natural gas and oil prices are not the end game for what you pay at the pump. Natural gas’ commodity price is a much smaller portion of the final retail price as compared to oil, by a factor of about half. Andrew Littlefair, CEO of Clean Energy Fuels Corp (NASDAQ:CLNE) described this during the most recent earnings call. Below is a slightly paraphrased version:

You get 7 gallons per Mcf, so your commodity per-gallon is about 47 cents as we sit here today … You have to haul it, store it, so I’ve always said to add about a dollar, a dollar ten … so that puts you at the nozzle tip at $1.50, $1.60, and you’re competing with diesel at $4.00. So there’s a lot of room in there to share with the customer, and some room for us. You just have to do the math.

And the math makes it pretty clear why natural gas is so compelling. The cost of the commodity itself could double, and the cost “at the pump” would still be just over $2.00 per gallon. Add in 30% margin, and $2.60 per gallon competes pretty strongly with $4.00 diesel. As Matthew DiLallo mentions in the article linked at the top, gas and diesel prices are about 2/3 based on oil, compared to about 1/3 of the price for natural gas.