As we already know from media reports and hedge fund investor letters, many hedge funds lost money in October, blaming macroeconomic conditions and unpredictable events that hit several sectors, with healthcare among them. Nevertheless, most investors decided to stick to their bullish theses and their long-term focus allows us to profit from the recent declines. In particular, let’s take a look at what hedge funds think about Clarus Corporation (NASDAQ:CLAR) in this article.

While collecting more data about Clarus Corporation (NASDAQ:CLAR) we came across Dan Roller’s letter to shareholders of Maran Capital Management for the 2017 fourth quarter, in which this hedge fund shares its views on the company. We bring you one part of the report:

“Clarus Corp, the parent company of Black Diamond Equipment and Sierra Bullets, has been a core position for over two years, and remains our largest position. The company continues to execute well. 3Q sales grew high single digits in the core Black Diamond business, driven by particular strength in apparel (+70% y/y for “in-line” merchandise) and the climbing category (+17% y/y aided by the launch of climbing shoes). The balance sheet remains fairly unlevered, and the company has significant NOLs to shield taxes over the next several years. I continue to believe that CLAR is meaningfully under-valued; the stock still fits my framework of being a potential “three-year double.” I believe meaningful value creation has occurred over the last year or two (as evidenced by new product launches, accretive M&A, and significant sales and margin improvement), yet the stock continues to trade for less than which I think the company could have sold itself in the summer of 2015, when the company last explored strategic alternatives. I gave a presentation on CLAR earlier this month at the Best Ideas 2018 Conference, Hosted by Manual of Ideas. A copy of the slides can be found here, and a transcript of the talk should be available shortly.”

Readers will be interested to know that board member Nicolas Sokolow was responsible for the last major insider purchase, snapping up 5,076 shares at $7.26 in November 2017. As of this writing the shares were trading at $10.94. 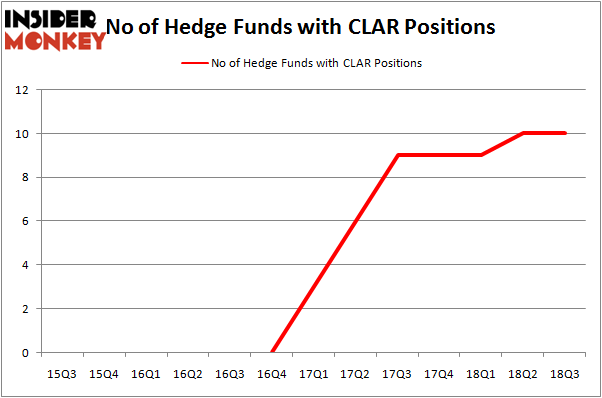 According to publicly available hedge fund and institutional investor holdings data compiled by Insider Monkey, Greenhouse Funds, managed by Joe Milano, holds the most valuable position in Clarus Corporation (NASDAQ:CLAR). Greenhouse Funds has a $22.7 million position in the stock, comprising 5.5% of its 13F portfolio. The second most bullish fund manager is Jim Simons of Renaissance Technologies, with a $10.3 million position; less than 0.1%% of its 13F portfolio is allocated to the stock. Some other peers that hold long positions comprise Nelson Obus’s Wynnefield Capital, Mark Broach’s Manatuck Hill Partners and Chuck Royce’s Royce & Associates.

Let’s go over hedge fund activity in other stocks – not necessarily in the same industry as Clarus Corporation (NASDAQ:CLAR) but similarly valued. These stocks are MiX Telematics Limited (NYSE:MIXT), T2 Biosystems Inc (NASDAQ:TTOO), and Immersion Corporation (NASDAQ:IMMR). This group of stocks’ market valuations are similar to HTA’s market valuation.

As you can see these stocks had an average of 12 hedge funds with bullish positions and the average amount invested in these stocks was $65 million. That figure was $53 million in CLAR’s case. Immersion Corporation (NASDAQ:IMMR) is the most popular stock in this table. On the other hand MiX Telematics Limited (NYSE:MIXT) is the least popular one with only 6 bullish hedge fund positions. Clarus Corporation (NASDAQ:CLAR) is not the least popular stock in this group but hedge fund interest is still below average. This is a slightly negative signal and we’d rather spend our time researching stocks that hedge funds are piling on. In this regard IMMR might be a better candidate to consider a long position.