Did just agree to be ransomed, or is the bank just wisely paying to move forward? Citigroup Inc. (NYSE:C) has broken with its peers in settling one of the last post-crisis lawsuits brought by the Federal Housing Finance Agency against 17 banks in 2011. The FHFA’s claim was that the banks had mis-sold mortgage-backed securities to Fannie Mae and Freddie Mac, the government-sponsored mortgage companies that were effectively nationalized in 2008 at the height of the credit crisis.

Citigroup Inc. (NYSE:C)’s decision looks like a smart one to me. According to the Financial Times, similar lawsuits have been settled for “cents on each dollar” of the total principal amount in question. For Citi, that principal amount is $3.5 billion, so a rough estimate of the settlement doesn’t look exorbitant, particularly once you compare it to the opportunity cost of diverted management time and focus, the tangible cost of high-priced securities and litigation lawyers, and the drag these lawsuits have had on the multiple that investors have been willing to award the stock.

Admittedly, investors have already rerated the shares, which finished last year at a price-to-tangible-book-value multiple of 0.75. As of yesterday’s close, the stock was poised to trade at or above its tangible book value for the first time since the second quarter of 2011, with a multiple of 0.99. That increase has enabled Citigroup Inc. (NYSE:C) shares to outperform those of its two nearest peers and the S&P 500 year to date: 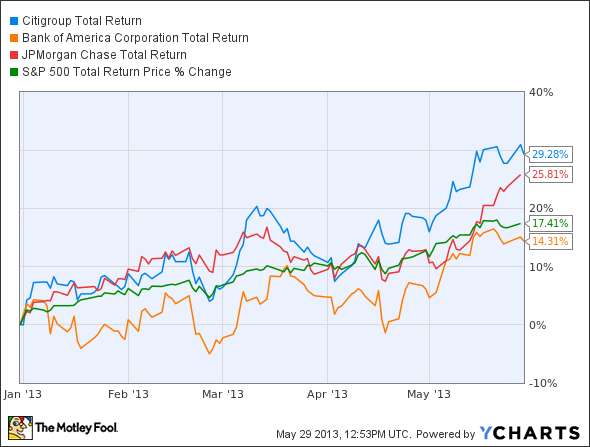 How far does the stock have to run? In an interview published in Barron’s on May 18, legendary value investor Leon Cooperman outlined his thesis for the stock:

One of our holdings is Citigroup Inc. (NYSE:C), which trades at around $50, or roughly 0.9 times tangible book value. We believe the new management at Citi can more than double its return on tangible equity in the next two to three years by reducing the drag from the runoff of the Citi Holdings entity, which consists of businesses and portfolios that the company is exiting.