How do we determine whether Citigroup Inc. (NYSE:C) makes for a good investment at the moment? We analyze the sentiment of a select group of the very best investors in the world, who spend immense amounts of time and resources studying companies. They may not always be right (no one is), but data shows that their consensus long positions have historically outperformed the market when we adjust for known risk factors.

After sliding to a 3-year low in the middle of 2018, hedge fund ownership of Citigroup Inc. (NYSE:C) rose by a modest 5% during Q3. That also broke a streak of 3 straight quarters in which there was net selling of Citigroup among hedge funds. 97 funds tracked by Insider Monkey’s database were long Citigroup on September 30, which landed it just outside the top 10 among the 30 Most Popular Stocks Among Hedge Funds in Q3 of 2018, as well as just behind two other investment banks.

Today there are a lot of tools shareholders use to size up publicly traded companies. Two of the most underrated tools are hedge fund and insider trading signals. Our researchers have shown that, historically, those who follow the top picks of the best fund managers can outclass the broader indices by a healthy amount (see the details here).

At Q3’s end, a total of 97 of the hedge funds tracked by Insider Monkey were long this stock, a slight uptick of 5% from the second quarter of 2018. Below, you can check out the change in hedge fund sentiment towards C over the last 13 quarters. With hedge funds’ positions undergoing their usual ebb and flow, there exists a few notable hedge fund managers who were upping their stakes meaningfully (or already accumulated large positions). 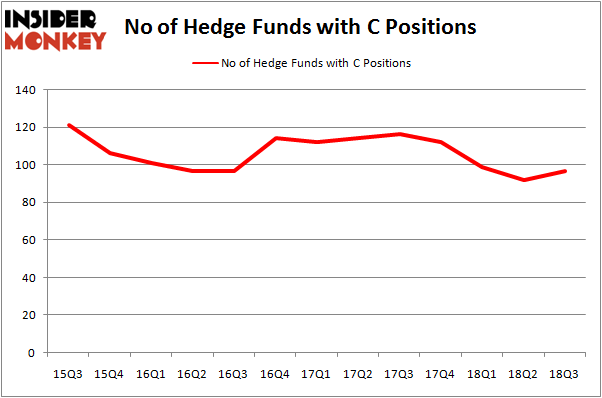 Among these funds, ValueAct Capital held the most valuable stake in Citigroup Inc. (NYSE:C), which was worth $1.88 billion at the end of the third quarter. On the second spot was Eagle Capital Management which amassed $1.68 billion worth of shares. Moreover, Greenhaven Associates, Diamond Hill Capital, and D E Shaw were also bullish on Citigroup Inc. (NYSE:C), allocating a large percentage of their portfolios to this stock.

As you can see these stocks had an average of 25 hedge funds with bullish positions and the average amount invested in these stocks was $1.83 billion. That figure was $11.41 billion in Citigroup’s case. The Walt Disney Company (NYSE:DIS) is the most popular stock in this table. On the other hand HSBC Holdings plc (NYSE:HSBC) is the least popular one with only 6 bullish hedge fund positions. Compared to these stocks Citigroup Inc. (NYSE:C) is more popular among hedge funds. Considering that hedge funds are fond of this stock in relation to its market cap peers, it may be a good idea to analyze it in detail and potentially include it in your portfolio.

30 Most Popular Stocks Among Hedge Funds in Q3 of 2018 Is C A Good Investment Right Now? is C a good stock to buy NYSE:C Yahoo Finance