Since the beginning of 2012, shares of Bank of America Corp (NYSE:BAC) have soared by more than 145%, leaving both the KBW Bank Index and the S&P 500 in the dust. 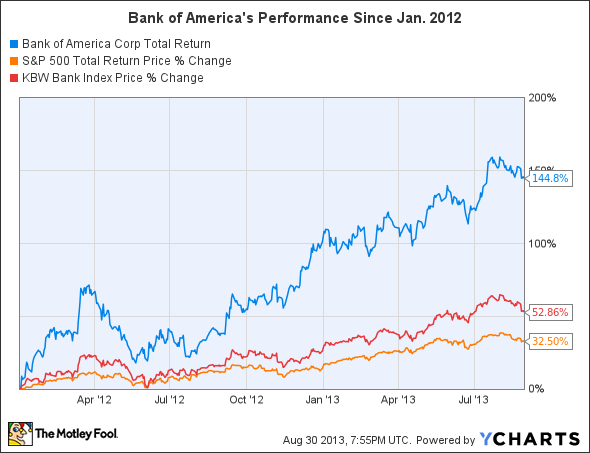 Given this, you’d be excused for concluding that its shares must be outrageously priced. But this conclusion couldn’t be further from the truth, at least not on a relative basis, as Bank of America Corp (NYSE:BAC) remains the cheapest big bank stock in the market today.

According to data supplied by Standard & Poor’s Capital IQ, the nation’s second largest bank by assets trades for only 0.72 times its book value. Meanwhile, the average valuation of the 24 banks included in the KBW Bank Index is 1.25 times book, or 73% higher. By this measure, Bank of America Corp (NYSE:BAC) trades for 1.11 times tangible book, behind only Citigroup Inc. (NYSE:C), which trades for an analogous multiple of 0.94. The index’s average is 1.82.

The commonality here should be apparent, as Bank of America Corp (NYSE:BAC) and Citigroup Inc. (NYSE:C) struggled more than their peers during and after the financial crisis. But, as Benjamin Graham, the father of value investing, would note, there’s a price at which everything is a bargain.

The question, in turn, is whether, despite the recent surge in its shares, Bank of America could still be characterized as such.

I think the answer is “yes,” though obviously much less so than before.

The catalysts for its shares are twofold. First, despite shelling out tens of billions of dollars for legal settlements and expenses, it’s still not out of the woods. The biggest remaining cases are a handful of securities actions that are being litigated in California, and a case that’s before a judge in New York over whether an $8.5 billion settlement the bank had previously entered into should be approved.

And second, Bank of America Corp (NYSE:BAC) still needs to complete a number of expense initiatives that are designed to save it more than $8 billion a year.

Once these are clear, industry analysts expect the bank to earn anywhere between $20 billion and $35 billion a year in pre-tax earnings. Assuming an average tax rate of 35%, which is likely on the high side, that equates to between $1.30 and $2.30 in earnings per share. And taking this one step further, at 10 times earnings, that produces a share price of between $13 and $23.

The point is, there’s plenty of room for Bank of America to trade at the industry’s average multiple to both book and tangible book value and still be well within a reasonable multiple for its earnings.

The article Bank of America Is Still the Cheapest Big Bank originally appeared on Fool.com and is written by John Maxfield.