In this article, I will discuss how the trends in the mobile internet market will favor Cisco’s new solutions. This will act as a growth catalyst for Cisco Systems, Inc. (NASDAQ:CSCO) and enable it to sell more of its product and improve the company’s price multiples. 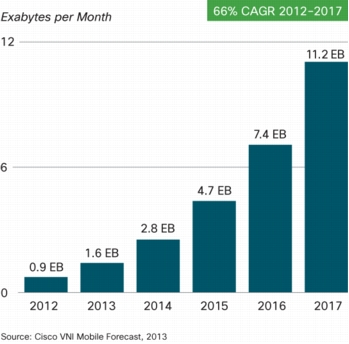 The question investors are asking is how Cisco will achieve sales growth with the new mobile internet solution. Mobile cloud traffic is on the rise all over the world. According to Cisco research, it reached 885 petabytes per month at the end of 2012, up from 520 petabytes per month at the end of 2011. In this chart, Cisco Systems, Inc. (NASDAQ:CSCO) forecasts still greater yearly increases. The global mobile data traffic will rise from 1.6 Exabytes in 2013 to 11.2 Exabytes in 2017. In other words, companies with dominant mobile internet solutions will have the opportunity to compete in a bigger market in the next few years.

In the second chart, IDATE-LTE Watch Service, a respected research firm, reveals its research results for the global LTE market, which is dependent on the mobile internet. The research report predicts astronomical growth in the sector. The market will grow from 119 million subscribers in 2013 to over 830 million subscribers by 2016. This trend will likely affect the numbers of Cisco Systems, Inc. (NASDAQ:CSCO)’s new mobile internet solutions.

“Market transitions have never occurred at a faster pace than we are seeing today. At the heart of each of these transitions – cloud, mobility, video, any device, social networking, and virtual networks – is the network. Make no mistake about it: Cisco is focused on driving the opportunities created by these transitions, and in our view we have never been more relevant than we are today,” said John Chambers, Cisco’s CEO. Cisco Systems, Inc. (NASDAQ:CSCO) reported second quarter net sales of $12.1 billion, net income of $3.1 billion, and non-GAAP net income of $2.7 billion. Cash flows from operations were $3.3 billion for the second quarter of fiscal 2013, compared with $2.5 billion for the first quarter of fiscal 2013, and compared with $3.1 billion for the second quarter of fiscal 2012. Sales at Cisco’s fastest-growing segment, Wireless, were up 27%, resulting in the fifth-consecutive quarter of record top-line growth. Data center revenues expanded 65%, led by Cisco’s Unified Computing System.

“Cisco delivered record earnings per share this quarter and record revenue for the 8th quarter in a row in a challenging economic environment,” said Chambers. “As new markets grow and are created, such as the Internet of Everything, it’s very easy to see how the intelligent network is at the center of that future.”