Cisco Systems, Inc. (CSCO) Is Cheap. Should You Buy?

The world’s largest maker of computer networking products, Cisco Systems, Inc. (NASDAQ:CSCO)‘s share performance has not been quite as spectacular as that of the rest of the market.  For such as stable tech giant to actually be trading below where it was for most of the peak recessionary years says something.  Either Cisco is fundamentally weaker than it has been in the past, or we are looking at one of the few remaining bargains in the amazing bull market of 2013!  Which is it?

Cisco in a Nutshell 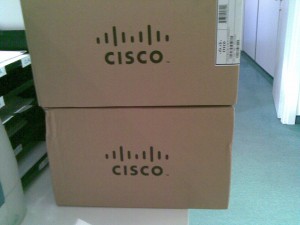 As the biggest supplier of computer networking systems, Cisco Systems, Inc. (NASDAQ:CSCO) does business all over the world, with almost half of its revenues coming from abroad.  Its products consist of networking switches (32% of sales), routers (18%), and “new products” (48%), which consists of what Cisco used to call the Advanced Technologies segment as well as wireless products, security solutions, and data center products.

How cheap is Cisco?

Cisco is an amazingly cheap stock right now for several reasons.  First, its valuation is like a utility company.  That is, the market is barely pricing in any growth.  At just 12 times last year’s earnings, Cisco Systems, Inc. (NASDAQ:CSCO) sounds cheap enough.  However, the company has a net cash position (cash minus debt) of about $32 billion.  Once you back that out of the equation, Cisco’s businesses are valued at just over 8 times earnings.  This is remarkably cheap, and is one of the cheapest companies in the market.

As if this weren’t enticing enough, Cisco is far from dead when it comes to earnings growth. According to market consensus, Cisco is projected to grow its earnings at an average rate of 8% annually over the next three years.  8% growth at a P/E of 8 sounds pretty good to me!

To verify just how cheap Cisco Systems, Inc. (NASDAQ:CSCO) is, let’s take a look at a few of its competitors: Juniper Networks, Inc. (NYSE:JNPR) and NetGear, Inc. (NASDAQ:NTGR).  These two companies are many times smaller than Cisco (especially Netgear), but Cisco’s size and product variety is unique among networking companies.

Juniper Networks makes a variety of networking solutions, but the company’s main product is IP backbone routers for service providers, which accounts for about 64% of Juniper’s sales.  Just like Cisco, about half of Juniper’s sales are international, making this a pretty fair comparison. Juniper Networks, Inc. (NYSE:JNPR) trades at 14.7 times forward earnings (2012’s earnings are misleading, as the company had a bad year earnings-wise), and is expected to grow earnings at around 11% annually over the next few years.  The company has a net cash position of about $1.85 billion, which is about 22% of their market cap (Cisco’s cash is about 29% of theirs). However, unlike Cisco Systems, Inc. (NASDAQ:CSCO), Juniper pays no dividend.