Chuck Akre Interview – “Three-Legged Stool”, Curiosity, Imagination, and Other Tricks of the Trade

In a new Patrick O’Shaughnessy’s Invest Like The Best episode, a renowned investor, Chuck Akre, shared his wisdom with a wide audience. The founder of Akre Capital Management, a hedge fund with around $10 billion in asset under management, talked about his investment principles, explaining his famous “three-legged stool” investment approach to publicly traded companies.

At the beginning of the interview, Chuck Akre talked about his “imagination is more important than knowledge” concept explaining that people can be very sharp, very intellectual but that doesn’t mean they will perform well in the world of investing. According to him, knowledge is not the only thing that matters on Wall Street, and adding curiosity and imagination to it may help you track down fantastic investment opportunities. He talked about how curiosity has helped him find some outstanding stocks as it made him research some companies he would probably skip without it. One such example is his investment in Bandag Inc, which ended up being acquired by Bridgestone Corporation in 2007. His son, who is a college professor, also finds the lack of curiosity among his best students, who usually learn only how much is needed for the best grades, very disappointing. Referring to his son, Chuck Akre wanted to emphasize how much curiosity is really important in various spheres of life. 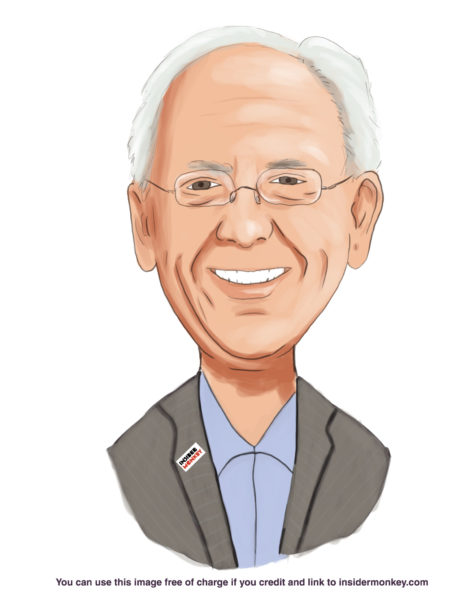 If you have heard of Chuck Akre, then you have probably heard of his “three-legged stool” concept. In the interview, he explained in detail the idea behind this concept that visually represents the essence of his investment philosophy. He explained that if you observe a three-legged milking stool that was and is used by farmers while milking cows, you can notice that one leg is placed under a different angle than the remaining two. That is the leg that goes under a farmer’s behind and helps the stool adjust to an uneven ground better than a classic four-legged stool. All this makes three-legged stool sturdier and more stable.

To describe his investment approach, Chuch Akre uses this analogy of three-legged stool, as he examines three business components when analyzing a potential stock to invest in. This is how the first leg represents above average business, the second leg symbolizes integrity, quality, and talent of a company’s management team, and the third leg stands for a company’s reinvestment opportunities and histories.

He further simplified the first leg by saying that if someone is aiming to have outstanding outcomes, they must own businesses with outstanding returns. That’s why he looks for those companies that have had stronger returns on the owner capital for a longer period of time and tries to conclude how did they achieve that, and whether they have the same perspective in future. Also, as the “second-leg” demands, a company should be managed by competent people who appreciate and see investors as partners. Chuck Akre is known for believing in an old saying “the wolf changes his coat, but not his disposition”, or as he simplifies it “if a guy put his hand in your pocket once, well, he’ll do it again”, this coming from his personal experience. If the “third leg” is there, meaning if a company also has a favorable reinvestment future, that should vouch for its stability and reliability (just like in a real stool), and that kind of company represents a good investment opportunity.

On the other hand, the game is not just about finding a company with outstanding and reliable business, it should also have an affordable price. And, as Chuck Akre points it out, once you invest in a remarkable business, you should master the art of not selling. He said that one of the most challenging things is to stay behind your investment for a long period of time. He acknowledges Akre Capital Management had made mistakes selling companies it shouldn’t have, and also buying some, and says that “every day is a learning day”. There is always something new to learn about the industry. For example, his fund, even though it had noteworthy returns in the last 10 years, it achieved them without holding a single stake in one of the FAANG stocks, just because they “weren’t smart enough to figure them out”.

Chuck Akre further talked about how his business model is distinct from Wall Street. “Our business model is to compound our capital, Wall Street’s business model generically is to create transactions. Logically.”  And how does Wall Street builds transactions? Well, according to Chuck Akre, by creating “false expectations” which is his term for earnings estimates. He called this “beat by a penny miss by a penny” syndrome. As it turns out, this syndrome affects the market, making it act illogical, and as a consequence, it sets up good investment opportunities for his fund from time to time.

“The bottom line of every investing is the rate of return. We use that as our key tool for everything.“

Getting back to the “second leg”, when asked to specify the traits of quality managers whose stocks he held for a long time, the first thing Chuck Akre replied was that “they don’t have a screen in the office showing the price of the stock”. According to him, most of the CEO’s measure their success in a firm through stock price rates, which is not quite appropriate. A small number of them is capable to comprehend the importance of compounding economic value per share, which is the thing Akre Capital Management looks for in a good CEO. He also emphasized the importance of smart capital allocation and shared an example of it, talking about O’Reilly Automotive, Inc. (NASDAQ:ORLY), a company in which he owns a stake. Namely, back in 2008, O’Reilly acquired CSK Auto Parts, which allowed them to have more exposure, covering more states in the US. 2008 was the year of recession, so the company’s wasn’t able to borrow all the money needed for the acquisition, and ended up having the issued stock. After they paid their small debt, they realized they are not going to be able to make more acquisitions, hence they changed their capital allocation, and started to lever up the company by buying shares. And, according to Chuck Akre, this was a highly intelligent move by the company’s management.

Relating to the above mentioned “art of not selling” Patrick O’Shaughnessy asked famous investor what are the factors that make him consider selling a stock he owns. He responded that they are going to reconsider each investment they have if they notice some kind of deviations in any of “the three legs”. Then again, he repeated that their decision making is imperfect, naming one of the mistakes they made – selling their position in Ross Stores, Inc. (NASDAQ:ROST).

Near the end of the interview, Chuck Akre gave advice to young investors:

“Follow your passion. That’s the most important thing. And, read like crazy. And be curious. About everything.”

In conclusion, he emphasized the importance of understanding pricing power, through this story: “It’s a big holiday weekend. Your wife is having a hundred people to a party in two hours. And the toilets are stopped. You will pay that plumber, whatever he asks, as long as he can get there before the party. That’s pricing power. “

To round up this story, let’s take a peek at Akre Capital Management’s 13F portfolio in order to see which are those stocks that have “three legs” according to the fund’s assessment.

At the end of March 2019, the most valuable position in its portfolio was in American Tower Corporation (NYSE:AMT) worth $1.42 billion on the account of 7.19 million shares. This position comprised 14.94% of its equity portfolio. American Tower Corporation is a Boston, Massachusetts-based provider of wireless and broadcast communication services. Although it is based in North America, this $90.97 billion market cap company has additional offices across the world. Year-to-date, its stock has gained 31.92% and on June 26th it had a closing price of $205.80. In its last financial report for Q1 2019, American Tower disclosed total revenue of $1,813 million and distribution per share of $0.90 up by 4.1% and 20.0%, respectively, in the same quarter of 2018.

The second biggest stake Akre Capital Management held at the end of the first quarter of 2019 was in Mastercard Incorporated (NYSE:MA). During the quarter the fund raised its stake in the company by 1% to 5.33 million shares worth $1.25 billion, amassing 13.23% of its portfolio. Mastercard Incorporated is a world-famous American financial services corporation. Over the last 12 months, its stock price went up by 32.96%, closing on June 26th at $261.30. Its market cap is of $272.62 billion, and the stock is trading at a price-to-earnings ratio of 43.65. Ten days ago, Bank of America raised its price target on the stock to $267.00 from $255.00 with ‘Neutral’ rating on it. For the first quarter of 2019, Mastercard Incorporated disclosed net revenue of $3.9 billion, up by 9% from the same quarter of 2018, and adjusted diluted EPS of $1.78 compared to adjusted diluted EPS of $1.50 in Q1 2018.

Among Akre Capital Management’s top five holdings at the end of March were also Moody’s Corporation (NYSE:MCO), Visa Inc. (NYSE:V), and O’Reilly Automotive, Inc. (NASDAQ:ORLY). In Moody’s Corporation, the fund held $1.03 billion worth a position on the account of 5.68 million shares outstanding, in Visa Inc. its stake was worth $763.34 million, counting 4.89 million shares. In the above-discussed company, O’Reilly Automotive, Akre Capital Management had $732.85 million worth a stake, which included 1.89 million O’Reilly’s shares, comprising 7.73% of its 13F portfolio.