Chipotle Mexican Grill, Inc. (CMG): Is Now the Time to Take a Bite?

Last week, Chipotle Mexican Grill, Inc. (NYSE:CMG) announced its first quarter results, and the company’s shares promptly rose 12%. Despite this highly favorable reaction by the market, the results were largely as expected. Revenue increased by 13% and earnings per share increased by 24%, both of which were slightly ahead of expectations. Meanwhile, same store sales rose just 1% and margins declined thanks to higher food and occupancy costs. So what drove the big jump in share price? The market’s reaction to Chipotle’s earnings was as much a reflection of analysts’ revelation that they had undervalued the company as it was the estimate-beating results.

Chipotle Mexican Grill, Inc. (NYSE:CMG), like many high growth companies with a premium valuation, is subject to above average volatility. As a result, the company’s shares will routinely move more than the overall market, which can create quite the roller coaster for shareholders. Just six months ago, Chipotle’s shares plunged to $233 on fears of competition from Yum! Brands, Inc. (NYSE:YUM)’ Taco Bell new Cantina Bell menu, rising food costs, and even a questionable short call by David Einhorn. As I wrote six months ago, this reaction was overdone and created a solid buying opportunity. Since then, the stock price has recovered nicely, albeit not to the all-time highs reached a year ago: 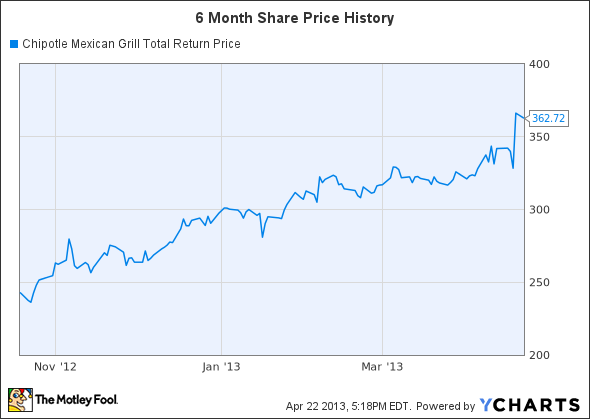 A long term view is critical

The chart above is an excellent example of why patience and a long term (5+ years) mentality is critical when considering an investment in a company like Chipotle. In the big picture, what has changed in the past year since the stock spiked to over $424 per share, plunged back to $233 per share, and has increased back to over $360 per share?

In short, I’d argue that nothing has changed. Chipotle Mexican Grill, Inc. (NYSE:CMG)’s growth rate has begun to decelerate (as expected) as it grows in size, with 1,458 restaurants at the end of the first quarter. However, there is still room to more than double the company’s footprint to 3,000 locations in the United States. International expansion will continue to add even more growth potential, but the size of the market opportunity is far less certain at this time.

Growth opportunities exist beyond just Chipotle’s location expansion. Management has announced that ShopHouse will be adding a fourth location as part of its methodical plan to perfect the relatively new concept prior to rolling it out on a large scale.

Within the existing restaurant base, Chipotle is continuing to innovate and find ways to drive future growth. Management’s highly successful trials of catering service and tofu-based “sofritas” will be rolled out to more restaurants in the coming months. More recently, Chipotle Mexican Grill, Inc. (NYSE:CMG) announced a new line of margaritas featuring Patron tequila. In the future, breakfast offerings may provide yet another way to drive revenue growth.

An additional driver of shareholder returns to keep in mind is the company’s share buyback program. As noted on this quarter’s earnings call, the company spent $51 million to opportunistically repurchase shares. This buyback has more than offset the dilutive effects of stock-based compensation and has reduced the overall number of shares outstanding.

Starbucks Corporation (SBUX): It Wants to Be a Pop Star