What if one of the simplest sectors, the restaurant sector, was about to be turned on its head? According to the NPD group, in September 2012 there were 616,008 restaurants in the United States. Factor in the US population size and you get roughly one restaurant for every 510 people, seemingly a very saturated market. The entire restaurant sector grew a measly 0.7% year over year, but one segment crushed this statistic. This segment grew near 6%, and in coming years may change the restaurant industry as we know it.

It’s called fast casual
It’s no secret that I’m talking about the fast casual segment. Fast casual is estimated to account for 27% of total food service sales. Investors have become more familiar with this trend ever since Chipotle Mexican Grill, Inc. (NYSE:CMG) went public in 2006. Since the IPO, the company’s revenue is up over 300%, and net income over 900%.

Here’s the catch: with the restaurant sector as mature as it is, fast casual’s success means someone else’s demise. According to Technomic, two of the fastest fading restaurant segments are diners and buffets. “America’s Diner” Denny’s Corporation (NASDAQ:DENN) has felt this pressure for years.

To offset an eroding customer base, Denny’s Corporation (NASDAQ:DENN) decided to restructure in 2007. At the time the company was 66% franchised and 34% company owned. It has since sold many locations to franchises to make the split 90/10. This restructuring, now complete, has naturally led to a 40% decrease in revenue since 2007, but Denny’s net income and free cash flow are improving. 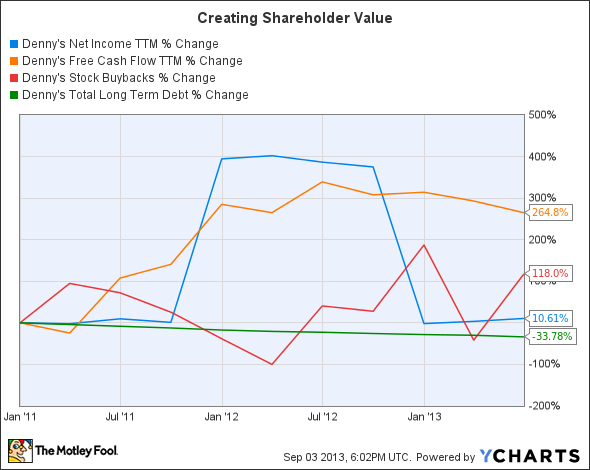 Despite Denny’s Corporation (NASDAQ:DENN) best efforts, it’s tough to remain optimistic about growth. Last quarter, only one franchised restaurant opened (net). Comp-sales were barely positive, and are predicted to be flat going forward. Denny’s has done well considering it’s in the dying diner segment, but it just doesn’t offer investors the same opportunity that some fast casual joints offer.

Open the IPO Floodgates
Tex-Mex chain Chuy’s had a very successful IPO in July 2012. Three months ago Noodles & Co (NASDAQ:NDLS) debuted with a strong IPO of its own. Both IPOs priced at the top of their range and are currently crushing the S&P 500, up 108% and 150% respectively. While many fast casual chains are still young, these recent successes seem to be luring more chains toward the IPO waters.

On August 29, Potbelly Sandwich Shop, a Chicago-based chain with 286 locations, filed a preliminary prospectus. Focus Brands, parent company to Moe’s Southwest Grill, appears to be working toward an IPO also. The uber-popular Smashburger just hired firms to form a strategy for capital growth.

This could be the start of a larger trend: IPOs from fast casual chains with stratospheric growth targets.

*No target has been given by the company. This seems like a reasonable estimate, based on competitor Five Guys’ current size.

As these chains expand further, other restaurants are going to start feeling the heat that Denny’s Corporation (NASDAQ:DENN) has already experienced. Many see quick service as fast casual’s natural competitor, but the data doesn’t support this.

The same report from the NPD group claimed that of the 4,442 restaurants opened during the year leading up to September, the majority were fast food restaurants. Quick service easily outpaced full service, which leads me to believe the next segment to feel fast casual’s pressure is the full service segment.