The exciting IPO is back baby! It seems like a galaxy far far away since the thrill of LinkedIn Corp (NYSE:LNKD)‘s opening day. After a string of other lackluster initial public offerings, Noodles & Company stole the show last week by nearly tripling in price. Some bulls say Noodles is the next Chipotle Mexican Grill, Inc. (NYSE:CMG). Some bears say the company is overpriced. Either way, I say the company’s use of the IPO proceeds proves this company is a winner.

Noodles & Company’s IPO was originally slated to make the company $75 million. High demand caused an $18/share opening — above original IPO expectations — netting the company $87 million. The plan was to use $66 million to pay down debt, but with the extra cash from the higher IPO price Noodles decided to pay off $86 million, leaving the company with around $14 million in outstanding debt.

This is being frowned upon by some in the investing world. From Pursuing Growth on Seeking Alpha:

“It is concerning that a large portion of the proceeds from this IPO is going towards paying off debts instead of fueling company growth.“

Some see this $87 million lump sum an opportunity for Noodles & Company to turbocharge its growth story. Therefore, some have a negative view of the company’s use of the proceeds.

Many top restaurant chains have grown without buying growth. Rather than growing in the bondage of corporate debt, they have chosen to pay off debt as soon as possible, simply using earnings to fuel expansion. 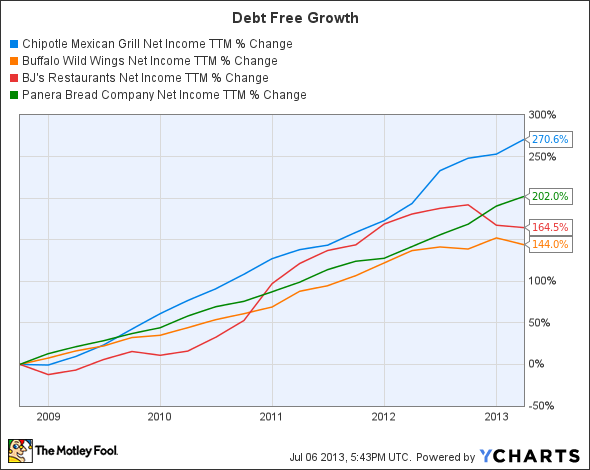 As we can see from these top stocks, Noodles doesn’t need to buy its growth. It can pay off debt and grow just like these other four companies.

Here’s some perspective. Chipotle Mexican Grill, Inc. (NYSE:CMG) has been growing 13%-14% per year for the past several years. Panera has been growing 6%-7%. That is some serious growth and these two players just keep growing. Chipotle opened 48 new locations last quarter alone, and expects to open close to 180 just this year. Panera Bread Co (NASDAQ:PNRA) opened 22 new locations in the 1st quarter, and is on track to open 115-125 this year.

Debt-free growth is the best kind of growth because it means you are growing a profitable business. The business model works. Consumers dig the product. The company then takes the profits and grows upon its previous success, rather than growing in order to succeed.

Paying off the debt now Noodles will save $3 million a year. The maturity on the debt is 2017, so this saves around $12 million in the long run. This company’s attitude towards debt reflects a long-term focus.

All five of these companies are among the fastest growers and most successful in the sector, but each one goes through lean times. Buffalo Wild Wings (NASDAQ:BWLD) was hit hard last year by rising chicken wing prices. Labor costs have hurt BJ’s Restaurants, Inc. (NASDAQ:BJRI). Anytime a company with a lot of corporate debt reaches an obstacle, it must ask itself: “do we reward shareholders or do we address our debt.” Spoiler alert: Debt wins every time.