Chinese internet stocks have struggled over the last two years. Leading stocks such as internet search giant Baidu have seen losses, while the S&P 500 has seen a meaningful 34% gain. Outside of the major Chinese internet stocks, the losses over the last two years have been closer to 50%. Some of these stocks have seen expectations drop from the outlandish forecasts a few years back, but strong long-term growth remains mostly intact, suggesting that investors should give the sector another look.

Recently, the sector has gotten a small boost due to the rapidly increasing valuation of Alibaba, which is now valued at around $100 billion. Other internet stocks, though, lack investment coverage and could be ripe for snapping up. ChinaCache Internatnl Hldgs Ltd (ADR) (NASDAQ:CCIH), Renren Inc (NYSE:RENN), and SINA Corp (NASDAQ:SINA) are a few of the stocks beaten down in the last few years even as growth potential remains intact. 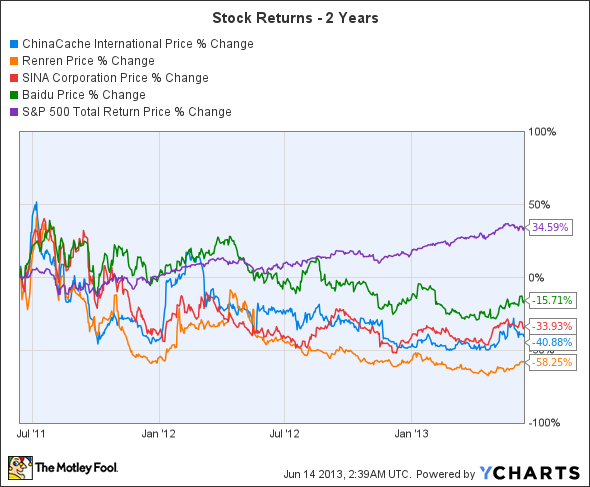 As with all Chinese internet stocks, the favorite aspect of the market is to label them with comparative US stocks. In most cases, the basis of the label is valid, but the companies aren’t all identical, and the markets in China and the US aren’t the same.

As a leading provider of Internet content and application delivery, ChinaCache Internatnl Hldgs Ltd (ADR) (NASDAQ:CCIH) is often compared to Akamai Technologies in the US. Akamai has a market cap of $7.6 billion and trades at roughly 5.3 times last year’s revenue. ChinaCache Internatnl Hldgs Ltd (ADR) (NASDAQ:CCIH) has a market cap that has slipped below $100 million and trades at less than 1 times revenue. In fact, analysts estimate revenue at $167 million for this year, placing the stock ever closer to trading at half of revenue.

While investors probably expected faster growth when the company went public, ChinaCache Internatnl Hldgs Ltd (ADR) (NASDAQ:CCIH) still reported 27% revenue growth during Q1 2013. The company, though, reported an adjusted net loss for the quarter as it continues to push growth for the sake of profits in order to expand its footprint in the enterprise market and position itself for the explosive growth in mobile data demand. The company forecast revenue growth to push towards 29% in Q2.

At the present, the company is dwarfed by the 1.1 billion users on Facebook and faces tough competition from the likes of Tencent, which competes with social networks that have larger user bases. Even more importantly, Renren Inc (NYSE:RENN) only has an enterprise value of $400 million due to cash and equivalents listed at $850 million.

Here is What Hedge Funds Think About SINA Corp (SINA)