Nearly one year ago today, shares of Apple Inc. (NASDAQ:AAPL) were flying high. Trading above $700 per share, the price made the Cupertino, Calif., company the most valuable on the S&P 500 (INDEXSP:.INX) by market capitalization, narrowly beating out ExxonMobil.

Since then, however, shares of the iPhone maker bottomed out below $400 per share in April and remained below $500 per share as of the end of last week. But are things about to change? If recent rumors are true, there’s reason for Apple Inc. (NASDAQ:AAPL) shareholders to be optimistic. 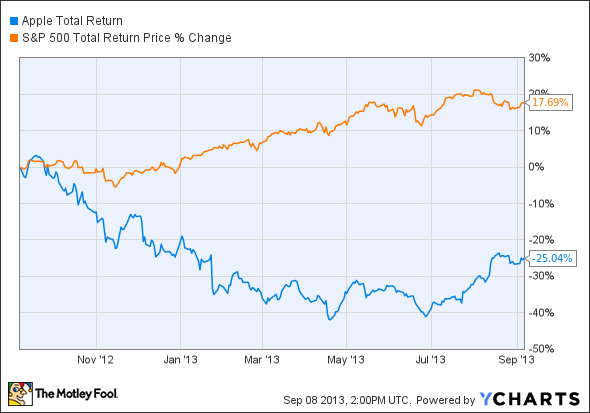 To be fair, Apple Inc. (NASDAQ:AAPL)’s fortunes began to change over the past few months. The recovery was boosted most recently by activist investor Carl Icahn’s announcement that his fund had taken a $1.5 billion stake in the company. According to his calculations, “even without earnings growth, we think it ought to be worth $625.”

And now there are two more reasons to be upbeat that the ongoing turnaround in its stock price could accelerate.

In the first case, it’s widely believed that Apple Inc. (NASDAQ:AAPL) will announce two new iPhones at a company event this Tuesday. The first will be an upgraded version of its iPhone 5 model. The second will be a new, cheaper phone purportedly termed the 5C, which is geared toward emerging markets such as China and India.

In the second case, it’s also rumored that Apple Inc. (NASDAQ:AAPL) has finally inked a deal with China Mobile Ltd. (ADR) (NYSE:CHL), which may be officially announced this week at an event in the East Asian country. If true, it would make the coveted iPhones available to more than 700 million new customers, as China Mobile Ltd. (ADR) (NYSE:CHL) is both China’s and the world’s largest carrier.

These developments have led multiple analysts to raise their price targets on Apple’s stock. Evercore Partners raised its target from $550 to $600 a share. And Cantor Fitzgerald initiated coverage with a target of $777 a share. According to the latter, Apple is “on the verge of an extended product cycle that we believe will include a refresh of existing products, increased penetrating with existing device categories, and entirely new market opportunities.”

Will these recent developments be enough to reward investors who doubled down on Apple Inc. (NASDAQ:AAPL) during its recent downturn? It very well could. But at the same time, there are still threats lurking in the background.

The article Why Apple Will Be This Week’s Top Stock originally appeared on Fool.com and is written by John Maxfield.