However, investors should also recall that it didn’t take long for Apple stock to plummet from $700 to less than $400 after reality didn’t live up to the hype of the last iPhone launch. While many factors contributed to Apple Inc. (NASDAQ:AAPL)’s stunning fall, this chart tells the real story: 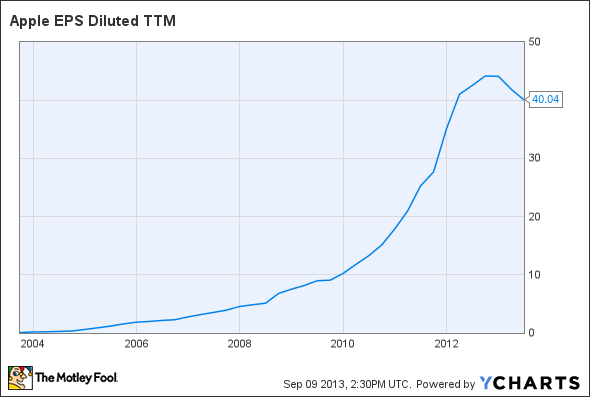 Simply put, in the past few quarters, Apple reversed a 10-year-old streak of posting high-double-digit earnings increases. Instead, EPS declined by nearly 10%.

There’s a clear lesson for investors here. In the short run, Apple Inc. (NASDAQ:AAPL)’s stock may be judged by the “wow” factor it produces at the iPhone launch event. However, in the long run, all that matters is whether the products announced on Tuesday actually help Apple return to profit growth.

Keep it simple, stupid
Most analysts expect the higher-priced model — probably called the iPhone 5S — to look very similar to the iPhone 5, but feature a faster processor, a better camera, and a fingerprint scanner. If these rumors are true, it’s probably a good thing for Apple Inc. (NASDAQ:AAPL).

The iPhone 5. Source: Apple.  The more the iPhone 5S looks like this, the better for investors.

While other observers want Apple to offer iPhones with larger screens to compete with Samsung’s ever-growing Galaxy S and Galaxy Note series smartphones, simple is better for the bottom line. Back in 2011, some people were concerned that Apple’s iPhone 4S was too similar to the iPhone 4 to sell well.

Yet the iPhone 4S sold extremely well. Moreover, by eliminating the complexity involved in ramping production of an all-new design, the introduction of the iPhone 4S drove a significant increase in Apple’s gross margin. The result was strong profit growth for Apple in FY12.

If Apple Inc. (NASDAQ:AAPL) can change things up enough to keep smartphone buyers intrigued without radically redesigning the iPhone this year, the company will probably avoid a repeat of last year’s severe gross margin compression.

Moving downmarket, but only a little
The story is similar with Apple’s rumored lower-cost phone, the iPhone 5C. There are two important details related to the iPhone 5C that will affect Apple’s bottom line. The first is price: The unsubsidized price could plausibly be anywhere between $299 and $399. Some analysts think Apple stock will rally if Apple hits a price point of $299 or below.

Perhaps a shockingly low number would generate enough buzz to drive Apple stock higher in the short term. In the long run, though, Apple is better off erring on the high side with a price around $349 (or even a little higher). That should be enough to gain a nice foothold in the midrange market without sacrificing too much margin.