According to a Chicago Bridge & Iron Company N.V. (NYSE:CBI) presentation, the LNG project capital expenditures over the next two years will reach over $70 billion. The spending will reach a plateau in 2015 at over $45 billion and max out around $50 billion in 2017. Not bad for a market that topped out around $30 billion in 2012 and plunged this year. Probably not surprising, but a main beneficiary will be US based firms expected to win contracts for the abundance of new LNG export terminals in the planning stages. Chicago Bridge & Iron Company N.V. (NYSE:CBI) is expected to be a primary beneficiary along with Fluor Corporation (NEW) (NYSE:FLR) and KBR, Inc. (NYSE:KBR). Unfortunately these construction and engineering firms have already jumped on the expectations of revitalization in the domestic markets. The question remains whether the stocks can still benefit from the surge in spending. 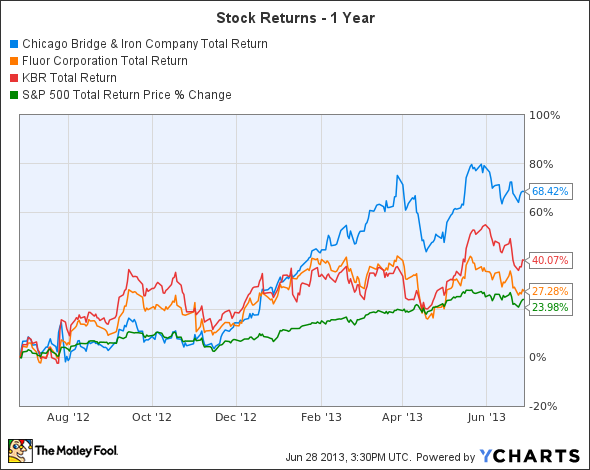 Chicago Bridge & Iron Company N.V. (NYSE:CBI) is considered the leading candidate as the company was heavily involved in building out the Australian LNG export terminals and is already working on the front-end engineering and design for the Freeport LNG project in Texas. Analysts expect the Freeport project to reach at least $3 billion for CB&I.

As the chart above shows, the stock has already surged nearly 70% in the last year due to the potential for massive scale LNG projects in the US. Even with the surging price, the stock only trades at 12 times forward earnings that continue to surge. With analysts expecting earnings to grow at a 21% annualized rate, the stock continues to offer value. With a market cap of only $6.4 billion and a backlog in excess of $25 billion, investors will be disappointed they didn’t find this stock sooner.

Fluor Corporation (NEW) (NYSE:FLR) is a massive engineering and construction firm with revenue approaching $30 billion this year. Earnings are expected to remain flat from 2012, but the stock is attractively priced at fewer than 13 times forward estimates. The company was very active in the LNG market in Australia and is expected to win a good deal of contracts in the coming boom in the US. With the large revenue base and market cap approaching $10 billion, Fluor Corporation (NEW) (NYSE:FLR) better win multiple large-scale projects in order to move the needle.

As with the group, KBR, Inc. (NYSE:KBR) has seen the stock soar over 40% in the last 12 months. As with Chicago Bridge & Iron Company N.V. (NYSE:CBI), the company already has FEED work on a North American LNG export project that could lead to significant business. In this case, the project is in British Colombia awarded by Malaysia’s PETRONAS. The project is proposing a two-train LNG plant with a yearly capacity of 12 million tons that will utilize shale gas from the North Montney region. This is on top of FEED work on another British Columbia plant being built by Chevron Corporation (NYSE:CVX) and Apache Corporation (NYSE:APA).