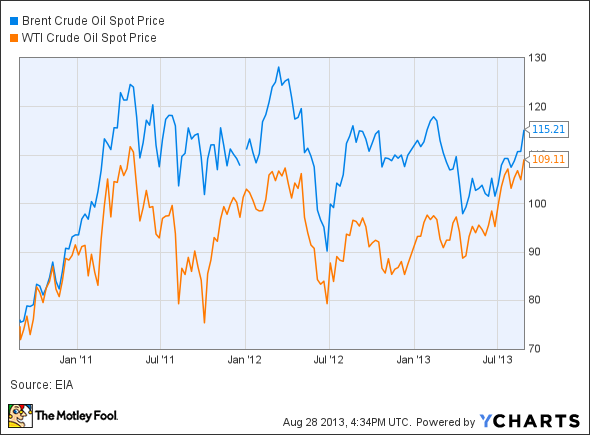 The price of oil is spiking as the administration leaks to the media its plans for attacking Syria. It’s unclear whether or not the U.S. and the U.K. will go before the UN Security Council before striking Syria. Observers expect any resolution condemning Syria to be vetoed by Russia, which supports Syrian President Bashar al-Assad and has a naval base in Tartous. It should be noted that reports out of Moscow in the past few hours indicate that Russia may be evacuating its remaining naval personnel today — another sign that the U.S. is taking action.

In the oil economy, Syria is not a real factor: The country was a small net exporter before the crisis and is now a net importer. The price of oil is up on the fear that the surrounding region could be disrupted. Bigger players in the region have been contributing resources on both sides of the conflict, with Iran supporting President Bashar al-Assad and Saudi Arabia supporting the Syrian rebels. The big fear is that the chaos in Syria will spread into Iraq, which is facing its own problems relating to ethnic divisions. The prime minister of Iraq and his Shiite government support the Syrian government, while the Sunni opposition party supports the Syrian rebels. While it’s unlikely, there are also fears that Iran will protest by closing the Straight of Hormuz, through which 20% of oil flows. There’s also a small chance of all-out war breaking out between the Saudis and Iran, which would be disastrous for both countries and their oil supplies.

In any event, oil stocks are up as the price of oil remains high and could easily go higher. It should be noted that U.S. oil supplies would be stable in any event. The EIA reported this morning that U.S. commercial crude-oil inventories were up 3 million barrels from last week to 362 million barrels — more than enough to make up for any import disruptions.

The article Oil Stocks Lead the DJIA Higher originally appeared on Fool.com and is written by Dan Dzombak.

Dan Dzombak has no position in any stocks mentioned. The Motley Fool recommends Chevron.