In 2012, the United States added 13.1 gigawatts of new wind capacity, beating natural gas. These new additions were partially driven by uncertainty over government tax credits, but nevertheless, 13.1 gigawatts of new capacity is significant. With natural gas prices rising, America is waking up to the fact that it has a huge wind resource right in its backyard. 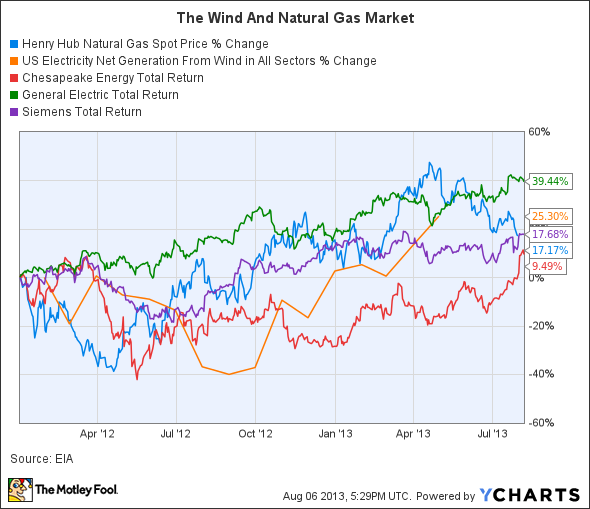 Chesapeake Energy Corporation (NYSE:CHK) was the poster child for the new natural gas industry, until the market crashed and it was forced to sell billions in assets. Fracking is very expensive, yet drillers can push costs off into the future to make it look like they are profitable. After looking at Barnett, Fayetteville, and Haynesville shale plays, analysts found that the break-even price is around $8.68 per mmbtu. With the current Henry Hub price around $3.50 per mmbtu, producing natural gas is far from economical.

Chesapeake Energy Corporation (NYSE:CHK) recognized its problem with natural gas and put its resources into developing oil and natural gas liquids (NGLs) rich plays. Its production of gas and NGLs grew from 30 thousand barrels per day (bbls/d) in Q1, 2009, to 168 thousand bbls/d in Q2, 2013. Still, these plays are high cost ventures that carry little room for error.

With continued pricing pressure in the NGLs market, Chesapeake Energy Corporation (NYSE:CHK) is only expected to produce earnings per share (EPS) of $1.53 in 2013. The company has a significant total debt to equity ratio of 1.06 and a price to book ratio around 1.3. Until its valuation comes down or its economics improve, Chesapeake is a hard sell.

Take a look at wind

General Electric Company (NYSE:GE) is a great play on the wind industry. Its 1.6-100 and 1.7-100 models offer a 47% increase in swept area compared to the 1.6-82.5 model, offering more power in a single turbine. The company’s broad experience in the energy sector makes it a trustworthy manufacturer with a full suite of base load and variable load products.

The company is huge, and there is little reason to invest if you are looking for a quick profit. It is better to look at General Electric Company (NYSE:GE) as a long-term investment. The conglomerate will continue to develop solutions for multiple fuels, thus stabilizing earnings. Its strong presence in the wind industry will be an asset as fossil fuel prices continue to rise. The firm’s return on investment (ROI) of 4.1% is small, but it offers a profit margin of 9.9%, a gross margin of 56.4%, and consistent profits.

Siemens is another industrial conglomerate with interests in the global energy industry. Within its energy segment, fossil power generation remains the strongest driver with €7.5 billion in sales in the first three quarters of 2013, while wind power brought it €3.6 billion.

Siemens has not been left out of wind energy’s growth. In the same time frame, the value of its wind power orders grew 93% to €5 billion. The segment had to eat a €91 million charge due to the inspection and retrofitting of a number of turbine blades in the U.S.

Europe’s offshore wind turbine development has been quite strong, and Siemens is ready to serve the market with its SWT-3.6-120 and SWT-3.6-107 turbines. Going forward, the picture is getting a bit cloudy. Budget constraints and a large install base have caused Germany to turn back the dial on renewables.