In a world starving for income, companies with a paltry yield suddenly become attractive. Sculpting a strong yielding portfolio isn’t as simple as setting up a stock screener and hitting search. The energy sector is especially volatile and inexperienced management teams can offer dividends in a very imprudent manner. Chaotically organized hedging programs only make earnings more volatile. It is very important to look at potential instabilities in a company’s business model before investing. 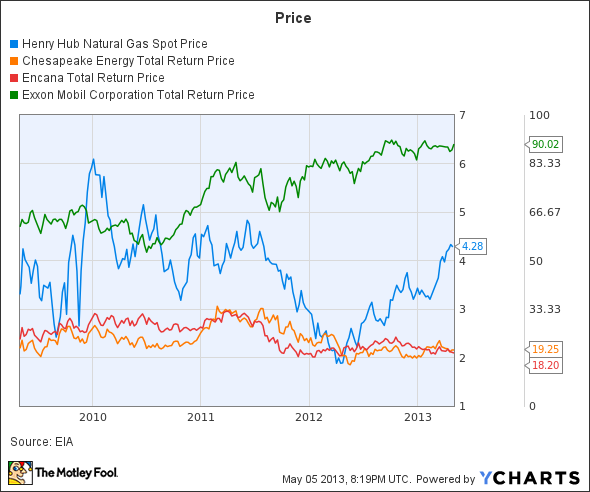 Upstream companies play the difficult game of taking resources out of the ground. Chesapeake Energy Corporation (NYSE:CHK) has increased its dividend over the past decade to its current rate of $0.0875 per quarter. The company is trying to grow into a mature firm with a responsible capital structure. Even with these aspirations, the firm needs to be taken with a giant grain of salt.

The company has a total debt to equity ratio of 1.01. This debt load would be acceptable if it was a diversified producer with a mix of wells, pipelines and refineries, but it is not. Recently it was forced to sell off many stabilizing assets to avoid bankruptcy.

Chesapeake Energy Corporation (NYSE:CHK) has managed to reorient its production toward more profitable oil-rich regions like Eagle Ford where it managed to produce 65% oil in Q1, 2013. These oil rich wells will help to drive the firm’s estimated earnings per share (EPS) of $1.29 in 2013, but investors need to remember that the firm is a giant upstream player without the natural hedges of the largest integrated oil companies. With such inherent risk in Chesapeake Energy Corporation (NYSE:CHK)’s business model, its dividend should be considered very hesitantly.

Encana Corporation (USA) (NYSE:ECA) is an old and established natural gas producer. It did not suffer the same catastrophe as Chesapeake, but it has had its fair share of negative news. Recently it was forced to write down billions of dollars in assets. It also sold its interest in a proposed liquefied natural gas (LNG) facility in Western Canada. Like Chesapeake, it is focusing in the volatile upstream market.

Encana Corporation (USA) (NYSE:ECA)’s current dividend offers a yield of 4.4%. This higher yield helps to explain why the company trades at a 2013 forward P/E ratio around 24 while Chesapeake trades around 15. Encana’s valuation is significantly higher than Chesapeake’s even though Encana Corporation (USA) (NYSE:ECA) has a higher debt load with a total debt to equity ratio of 1.63.

Like Chesapeake, Encana Corporation (USA) (NYSE:ECA) is trying to diversify itself away from pure natural gas production. Approximately 54% of its 2013 capital expenditures (capex) will go to liquids rich plays and 25% to oil. PetroChina recently agreed to put more than $2 billion Canadian dollars for a 49.9% working interest in the Duvernay play in Alberta. This will decrease Encana Corporation (USA) (NYSE:ECA)’s required investment, but it doesn’t change the company’s high valuation and high debt load.